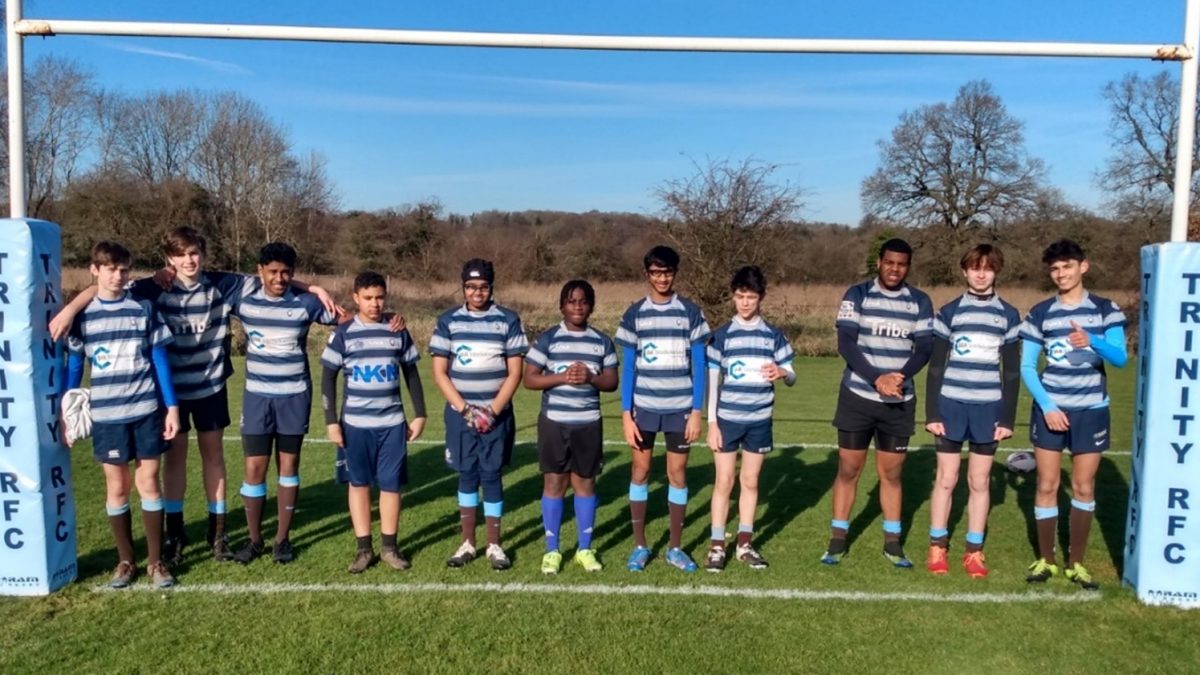 After an almost two-year absence since their Winning U13 season, the Trinity Titans U15s returned to Lime Meadow Avenue, to grace the 1st XV pitch once more, and defeat a combined Sutton & Epsom/ Guildford team in the first round of the Surrey Cup.

The team, consisting of 9 out of the current 4th year boys from Trinity, were facing a combined Sutton & Epsom/ Guildford squad of 28 players. Things did not get off to a great start, as Trinity missed several key tackles in the first few minutes of the game, allowing S&E to dominate possession, and run in a soft opening try. This seemed to be the wake up call the Trinity team needed on a fresh Sunday morning, and they bounced back from the kick-off, applying pressure to the S&E backs, with the forwards eventually turning over the ball, to release the backs, who passed it along the line, to the fullback Ozzie, who ran in Trinity’s first try of the day. Score 5-5.

Trinity continued to dominate, with strong defence and turnovers, resulting in Number 8 Aaron running in two tries over the next 15 minutes, the latter being converted by Jo. At 17-5, their dominance continued, with fullback Ozzie running in a second try from the halfway after some slick handling from the back. With the score at 22-5, Trinity seemed to lose concentration, and again let S&E through the open barn door, allowing them to run in an even softer try under the posts than the match had started with, with the conversion signalling half time and reducing the score line to 22-12.

Trinity were caught napping again from the kick-off to the second half, with S&E running in a converted try to narrow the score to 22-19. Trinity were luckily able to reply immediately, with Jo intercepting the ball after the restart, and running in a try in reply, to increase the gap again to 29-19. S&E seemed to step up a gear for the next 15 minutes, running in two tries’, with one converted to take the lead for the second time in the match at 29-31.

Form being in front for most of the game, this change of fortune seemed to now raise Trinity’s game, with Aaron running 50 metres to score under the posts, easing Jo’s conversion attempt, to take the lead again at 36-31. This was followed by Ashvin powering over in the 22 after a cunning sidestep, and Aaron scoring again to make his total of 4 tries for the day. Score 46-31.

Trinity was looking visibly exhausted at this stage, with S&E regularly refreshing their players out of their 28-man squad, and Trinity with no subs, and with these refreshed legs, S&E ran in a consolation try on the final play of the game to end the match at 46-36.

Trinity face Old Ruts next Sunday, 6th February 12:00 kick off, at home in Round 2 of the Surrey Cup.