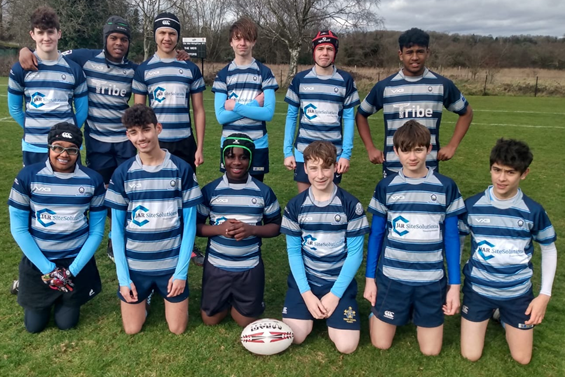 Missing three players from last week’s win against Sutton & Epsom, the Trinity Titans were joined by Andrei, a recruit, from Riddlesdown School in their closest game of the season so far. Losing on the last play of the game, having they had defended their goal line repeatedly after the clock had run out, Old Ruts grabbed victory from the jaws of an epic draw to defeat Trinity in the second round of the Surrey Quins Cup, even though Aaron had managed to almost repeat his try scoring from last week, scoring a hat-trick of tries in the second half.

The team, consisting of 10 out of the current 4th year boys from Trinity, and a new recruit from Yr10 at Riddlesdown, courtesy of Mr Edwards, were facing another tough opposition, with Old Ruts squad of 24 bouncing from their win of 31-9 against Esher last week. Things did not get off to a great start, as Trinity are getting used to, with several key tackles missed in the first few minutes of the game, allowing Old Ruts to dominate possession, and run in a soft opening try. Almost a replay from last week…or was it. As if watching a clip from “rugby’s funniest moments”, as the Ruts player was jogging under the posts in the goal area, a dogged chase back from Harry our Hooker, blindsided the Ruts player and tackled him over the dead ball line! This seemed to be the wake up call the Trinity team needs in the first two minutes of the game, with Trinity defending the goal line for the next 20 minutes, holding Ruts from scoring, but never really getting any clean possession, and escaping out of their own 22. The 24 rolling subs of the much larger Ruts squad started to wear out the 12 Trinity players, and they ran in two tries, back-to-back just before half time, as the Trinity boys were puffing for a breather. Score 0-12.

The half-time team-talk from their veteran Head Coach Phil “when I was your age” Mamode, reassured then that they had the advantage, and it would be Old Ruts puffing as they were now playing downhill on the 1st XV pitch, and the strong gusts of wind coming off the Horse Field, would propel their kicks into the bottom left corner of the pitch, and victory would be ours! The boys did not look that convinced…

Two minutes into the second half, after a deep kick off from Jo, Trinity had penetrated the Ruts defence, who until that point had gone untested, released Aaron to power through the middle of the pitch and score under the post, making the task of converting easier for Jo, and narrowing the score to 7-12. Game on! Regular player, Lucas made a guest appearance at this point, as our substitute, after rushing to LMA following a football match, and immediately made an impact with some good carrier and tackles in defence, as Trinity worked their way back down the pitch after the restart, culminating in Aaron crossing the line again for his second try of the day, to draw level. Score 12-12.

The game continued for the next 20 minutes, with neither team showing dominance, in an evenly match contest, until Old Ruts finally managed to cross the line with the constant roll in of refreshed players from their squad at each stoppage of play, with the Trinity boys looking more and more tired, as they played on. This seemed to give the Trinity boys a kick up the proverbial back side, and they stepped up a gear immediately from the restart, to turn over the ball from the restart and with some slick handling, releasing Aaron, who managed to break three tackles in a row, and run in his third try of the afternoon. Score 17-17.

With only 2 minutes left on the clock, Trinity seemed assured of getting a draw in this encounter, and with some valiant defending of their own try line, won a goal line drop out, as the ref announced the last play of the match. The tactics of how to get the ball dead from this outfoxed the Trinity boys, as it would half the senior playing squad,  who needed to drop kick into space, and hope the ball bounced into touch before being picked up from a Ruts player…unfortunately they did not work this out, drop kicked it for Ruts to receive the ball, and power their way through from the 22 yard liner and score to finish the match 17-22.

This is the second match in two weekends where the author has witnessed some great, running and passing rugby where the boys should be very proud of their performance.

Trinity Titans U15’s next face Esher on Sunday, 6th March 11:00 kick off, away in Round 3 of the Surrey Quins Cup.