Trinity School is now a major independent day school with outstanding facilities and a reputation for achievement in a very wide range of activities as well as high academic standards. It is a far cry from its traceable origins as a distinctive school in the 1850s, though it does of course owe its foundation and its being to Archbishop John Whitgift, whose will established education as one of the two elements of his foundation in Croydon. Trinity has always taken particularly to heart Whitgift’s instruction to ‘teach freely certain children of the Parish of Croydon of the poorer sort’ and has kept its doors as wide open as possible to boys of potential, whatever their parents’ means.

By 1850, the educational side of Whitgift’s Foundation had virtually withered away. The school room had since 1812 been let (without fee) to the National Society, who for 1d a week provided a very basic training in reading and writing, and instruction in the Holy Scriptures. Croydon was growing rapidly with the arrival of the railways, and the demand for a decent education led to civic pressure groups to energise those responsible for Whitgift’s Foundation. As a result, a scheme, with the first representative Governing Body, was approved in 1856 to build two schools, a ‘poor’ school, and a ‘middle-class or commercial’ school. Available funds meant that only one could be started, and the Vicar of Croydon’s dominance meant that it was the ‘poor’ school.

It opened in 1858 on newly built premises in Church road, in the heart of the parish. William Ingrams, who had been appointed as Master of the National School in 1850 when 20, was appointed Head. A remarkable man, he remained Headmaster of the Poor School and its successor until 1905, and was clearly a much respected and beloved figure.

The Poor School was for boys of 7 to 14, who lived in the parish of Croydon and who were ‘able to read and not afflicted with any infectious or noisome disease’. 4 pence a week was the maximum to be charged, and the curriculum was the same as a National School. The Master was to take them to church every Sunday. The school was very popular and successful. Inspection reports in the 1870s (which led to gratuities to the Head) were glowing. However, the introduction of full provision for primary education led to the Poor School becoming an anachronism, which the Charity Commission wished to abolish. The Governors objected, but ultimately in December 1881 it did close, and Whitgift Middle School opened the following term on the same site.

Mr Ingrams, despite agitation from those more concerned with paper qualifications than performance that his appointment would be ‘suicidal’, became Headmaster and a number of pupils, whose parents could weather the financial leap to £250 a term, joined him.

In the frank language of the time, Whitgift Middle School (Middle was preferred to Modern, the first suggested title) was a Third Grade secondary school. The Grade reflects the specific purpose, not the quality! It was geared to provide a suitable education for those leaving at 14 or 15 to enter commercial occupations. It was a popular and successful school which, without further legislation, gradually but steadily raised its aspirations.

Many reports from the 1870s onwards deplore the inadequacy of the buildings in Church Road; attempts were made to re-site and enlarge it in Selhurst Crescent, and then in the 1920s it was intended to move WMS to Haling Park. After a lengthy agitation, which included a move to amalgamate the two schools, the Governors decided that Whitgift School should move to Haling Park, and WMS take over the buildings in North End. From 1931 to 1965, this remained its home.

Its rise in status was marked in 1938 by the election of the Headmaster, Horace Clayton, to the Headmasters’ Conference. (From 1858 to 1994, there were only five Headmasters: Ingrams, Rev GA Jones, who had also served for over 20 years as Second Master, Clayton, Oliver Berthoud, and Robin Wilson). Its fee level and use of public monies through the Direct Grant scheme kept it accessible to all sectors of society, and its academic stature continued to improve. In 1954, its name was changed, to ensure its identity, to ‘Trinity School of John Whitgift’ (though its Old Boys’ Club is still known as The Old Mid-Whitgiftians).

The Foundation had always been relatively well funded; its income was transformed in the 1960s. The Shirley Hotel was bought, and Trinity moved to its present site in 1965, and North End became the Whitgift Shopping Centre. A major challenge from the late 1970s was to ensure the level and quality of intake after the Direct Grant system was abolished. (While the Governors had withdrawn from the scheme earlier, Trinity still received half its entry from the Croydon 11+ scheme). Under the scheme, the quality of intake had been very high, with up to 20 Oxbridge awards.

As the school flourished and became larger, so new buildings were approved until the present remarkable provision was achieved. It is known nationally through such aspects as the outstanding Trinity Boys’ Choir, the election of the Headmaster to be Chairman of the Headmasters’ Conference in 1993, and many impressive sporting achievements. With full use of the Government Assisted Places scheme, and subsequently the Foundation’s own bursary scheme, Trinity has consciously set itself to remain true to the Founder’s will, interpreted in modern terms to provide an excellent education for those boys who can benefit from it, whatever their parents’ income. 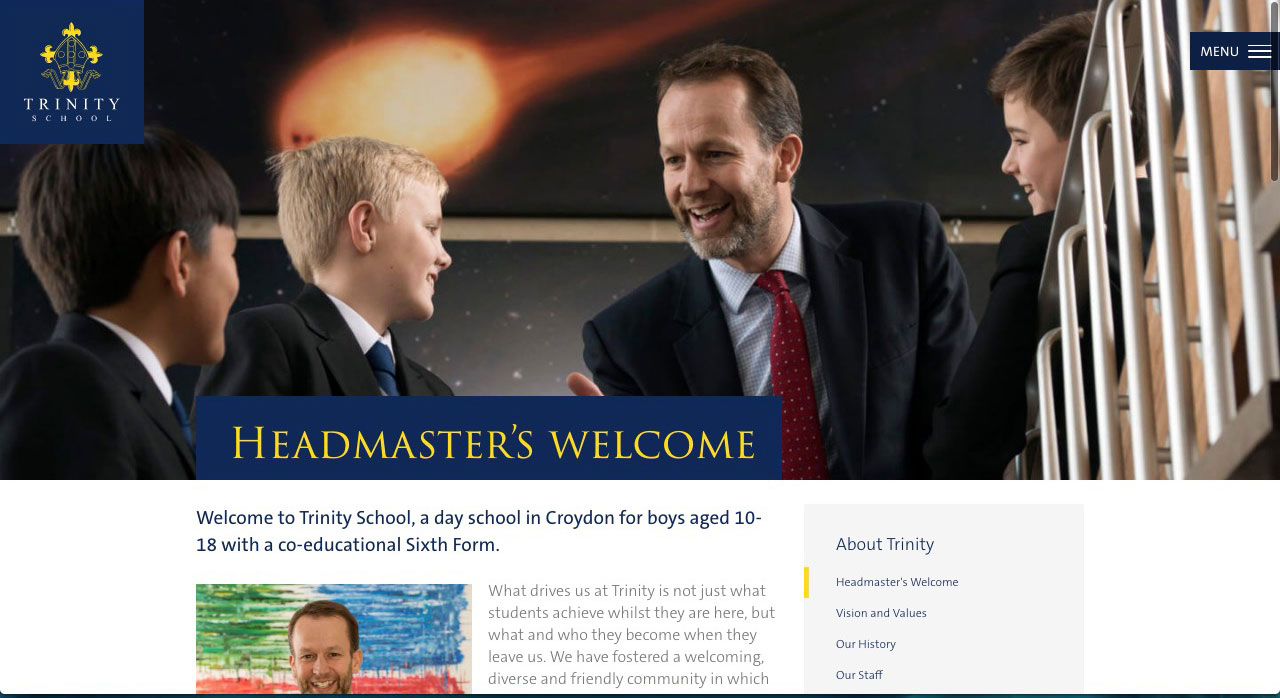