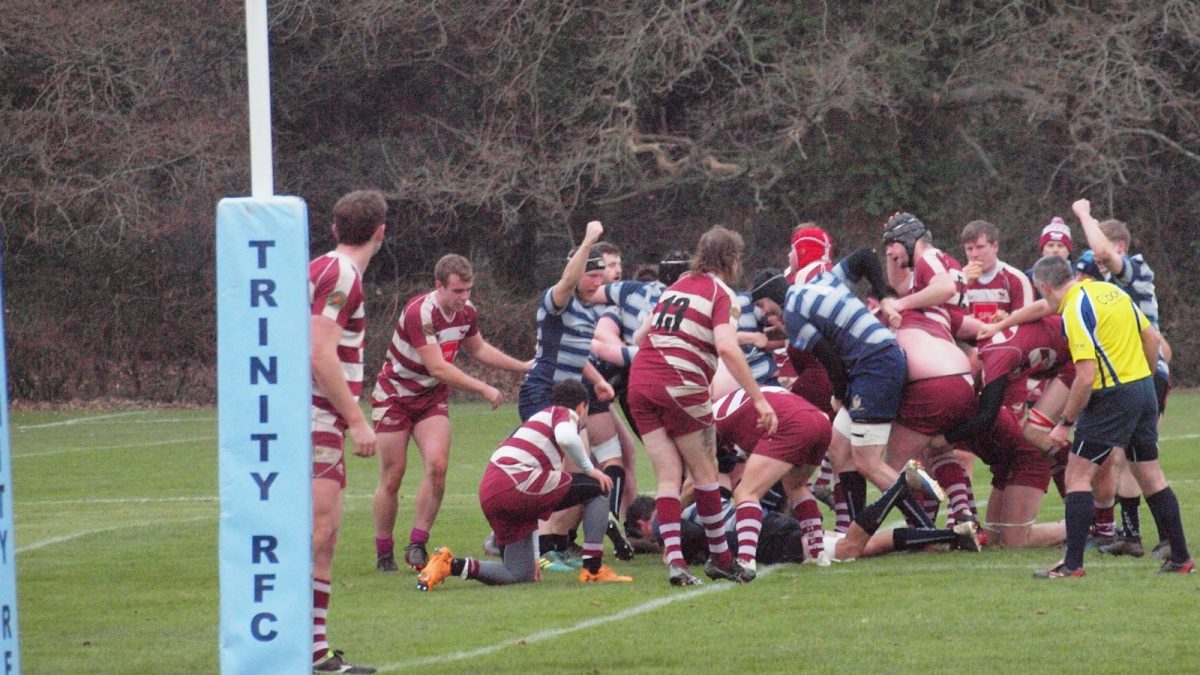 The early exchanges were even with both teams endeavouring to play open running rugby. Trinity were penalised after 10 minutes and Ollie Mann opened the scoring for the visitors with a 3 pointer.

In the first scrum it was clear that Trinity were the stronger and they won a penalty. They now set up more attacks with some chips through by Harry Wilson and a Ben Vaillant interception creating half-chances. After 14 minutes the home pack forced Haileybury off their own scrum ball and fly half James Hammond found Marc McEvilly with a long pass. He powered forward and set up a strong position for Trinity to recycle well and Dave Spedding forced his way over for the opening try.  McEvilly converted for a 7-3 lead.

Vaillant won a turnover 5 minutes later and Mids set up a powerful maul which drove for 10 metres before the ball was released to McEvilly who scored the hosts’ second try and converted himself to increase the margin to 14-3.

Haileybury came back quickly and produced some quality rugby to send skipper George Jevons-Fellowes over. 14-8. A rare call back for ’man in front of the kicker’, now a rarity at kick-offs in top rugby, was no advantage to a struggling Haileybury scrum and Trinity forced their way into the visitors’ half and made ground with tight play.  Vaillant forced a penalty and McEvilly stroked over the kick for to increase the lead to 17-8.  Haileybury now won a good position and had a penalty to the corner to create a try opportunity.  However, they missed the touch and Trinity cleared. Just coming up to the break the ball went loose in midfield and Wilson hacked through.  He doggedly chased the ball and controlled it well at his feet and his persistence was rewarded when he got there first to touch down and bring the half-time score to 22-8 in Trinity’s favour.

Haileybury dominated the territory in the early part of the second half and some loose  tackling by Trinity meant that there were gaps for them but Temi Okenla and Andy Dean more than compensated for their colleagues with some crunching hits.  McEvilly then made his mark again with a big turnover. Full-back Ben Telfer put in some long kicks to pin Haileybury back.  One of these was returned and fielded by Wilson.  He chipped through, followed and caught his own kick and then swerved past the last defender only to pull his hamstring in this move and deny himself a wonderful individual score.  His injury allowed Hammond to move to scrum half and the experienced Dan Crouch to come on as a replacement at fly half.

A clearing kick by Haileybury was fielded magnificently by McEvilly and he drove forward to set up another Trinity attack.  Haileybury were penalised in their own 22 and Trinity needed no invitation to opt for a scrum whjch they controlled for a push-over try with George Daniels getting the touchdown.  Crouch had hardly had time to warm up but coolly slotted the conversion and Trinity had a comfortable lead of 29-8 and a bonus point after 55minutes.  They added to their lead 7 minutes later when, from a line out on the right, Tim Jupp threw short to Dave Spedding at the front and received the return pass enabling him to scoot to the line.  Crouch converted with a magnificent kick.  Trinity were rampant now and another scrum close in allowed Daniels to feed Hammond and Telfer flying up at pace took the pass for another try. 41-8.

Trinity continued to impress and threw the ball around with Vaillant, McEvilly and Crouch all carrying well.  Haileybury’s heads never went down however and in added time they had to score when Jevons-Fellowes had his second try for the taking but unselfishly unloaded to a colleague and the try was harshly denied for a knock-on.  However, play went on for some 7 minutes beyond the 80 and in this period Trinity were given two yellow cards and Mann scored two tries which he converted himself to make the score less one-sided.

MATCH PHOTOS
Photos from this match (c) Neil Pepper 2022 can be found via this link.
https://flic.kr/s/aHBqjzA8Nq