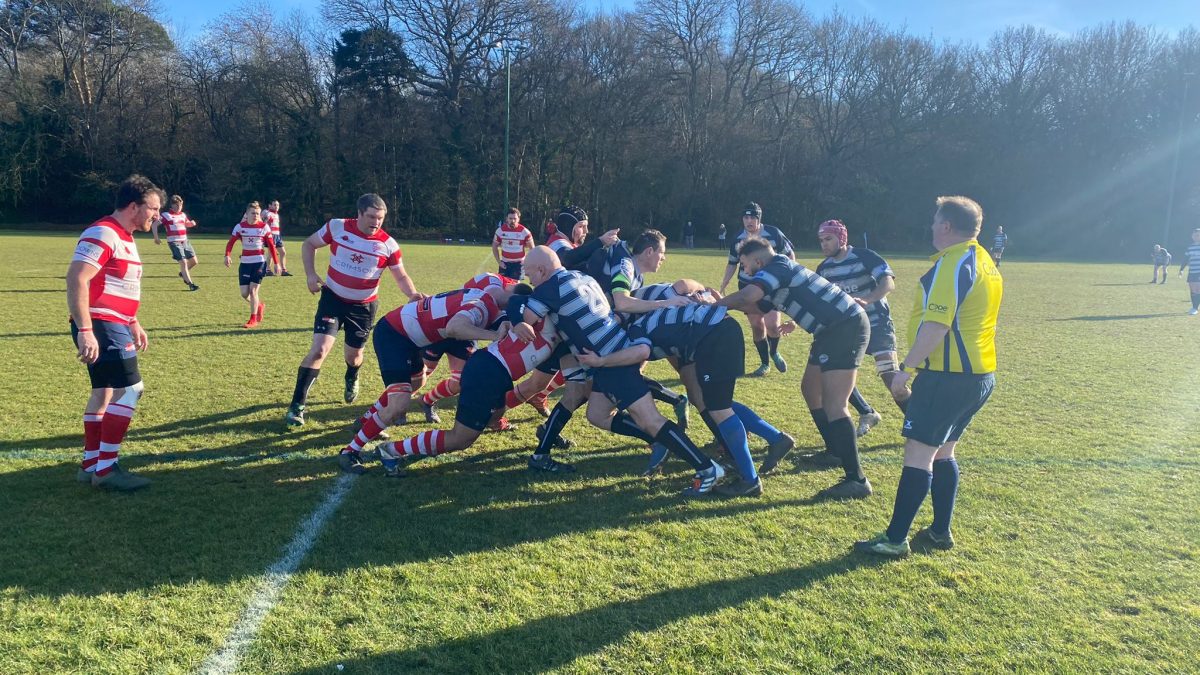 Trinity welcomed Dorking to LMA on a bright but blustery day for a league fixture; Trinity were looking to build on recent performances against Sutton & Epsom and Becs Old Boys fielding arguably their strongest squad of the season. Dorking are a National League team and have strength & depth across their sides, a ‘decent outfit’ according to Scotty.

Dorking kicked off with the slope & wind in the first half making it difficult for Trinity to play out of their half; quick taps from Will TD were the order of the day and Zou, Scotty, Krish and Sparky carried well to build momentum up the hill. This resulted in a first score for Sparky after some efficient ball retention in the Dorking 22 converted by James Duffy. The game overall was played in the right spirit however a rather nasty incident occurred shortly after where the Dorking 8 tip tackled Charlie landing awkwardly on his shoulder/neck and having to leave the field, a certain red card but the ref (who had an excellent game) didn’t see the foul play. Luckily Dom & Zou calmed things down and Trinity got back into their rhythm. Dorking looked lively in particular from their 9 who scored an impressive individual try and caused Trinity problems all afternoon; Dorking carried well from 12 and their Full Back was built like a tight head. Trinity repelled the oppo attacks and were back on the front foot resulting in Scotty (sporting a horrendous tash) barging over for a score and Trinity went in up at HT.

Cappers & Bouch pulled the group together at half time offering some wise words to keep playing & the scores would come; their wise words sang true with early second half scores coming from Sparky and Krish which were the result of Shieldsy marshalling things, James Duffy countering well from full back often making great yards, Bouch making yardage down the right wing, Harry Ford carrying effectively from 12 and Stanners taking offloads at pace. The forwards were building phases well again with Zou & Scotty are the forefront, Dom Jason Ben and Laurence were working hard with a highlight being a beautiful catch and drive on half way which was worked into the Dorking 22 and a peel ended with Krish crashing over for his brace. As the game wore on Trinity gained scrum dominance with Dom, Hoffy & Zou getting the upper hand, the last score of the game being an 8 pick from Sparky on the Dorking line to complete his hattrick.

All in all an excellent performance from the 2s who have now built some momentum with good numbers and regular players since Xmas, the play is more cohesive and everyone has playing a smile on their face playing open & attacking rugby. Congrats to Harry Ford on his debut, well done to Sparky on his hattrick and Krish for his brace, big shout to Hayden Jack who was back in the UK for 1 week with his missus from NZ and had a run out & few beers at the club, also to Ben, Hayden and Rob who played for the oppo as they turned up with 13 players. MoM goes to Krish for an impressive all round performance.