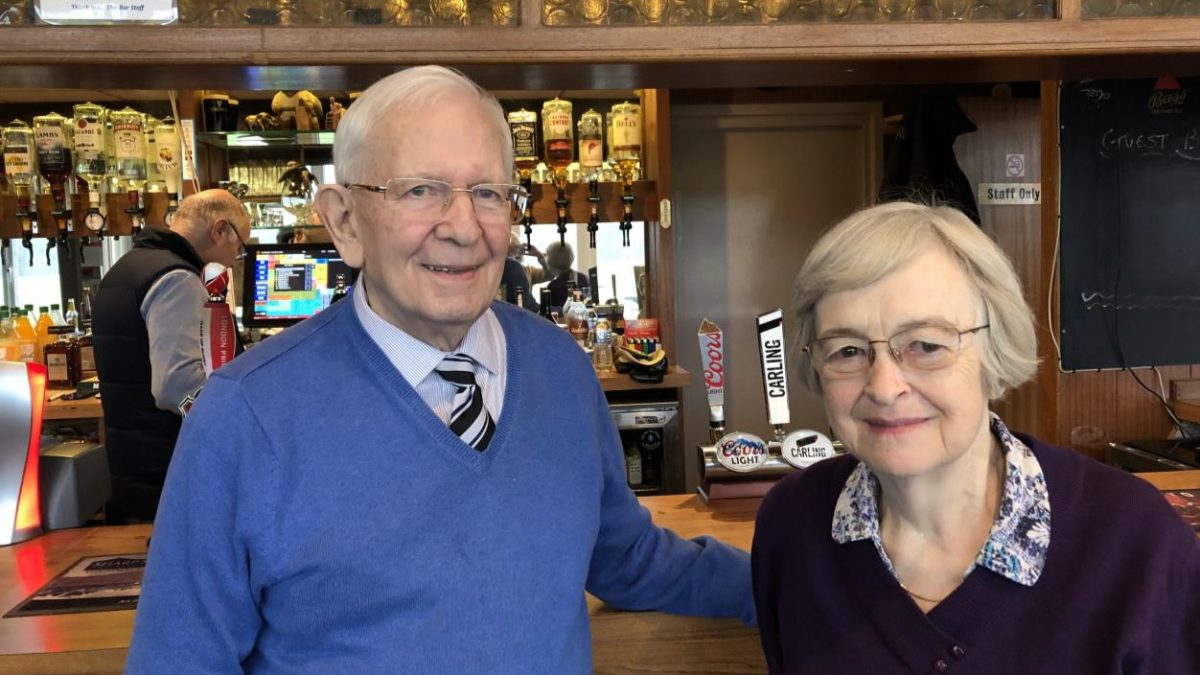 We reprint the following obituary from the Trinity Alumni website. 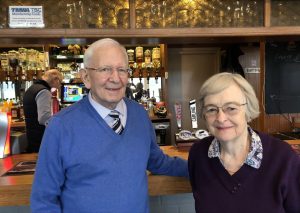 It is with great sadness that we report that Geoff Wilsher passed away on 19th January 2022, his 81st birthday. Tributes are pouring in and we will share these on this obituary over the coming weeks.

Geoff was a keen and successful sportsman at School, playing Hockey for the 1st XI, captaining the 2nd teams for Rugby and Cricket and hurdling in the athletics team. He continued to play sport at university and at the Club whenever he returned. Geoff not only excelled in sport and academia, but also in the CCF, where he reached the rank of under Officer in the RAF section and became the first member of the corps to take the controls of a jet fighter; a Gloster Meteor. 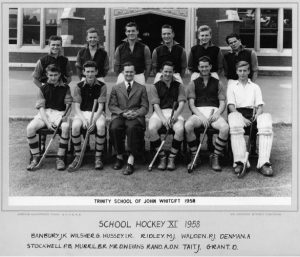 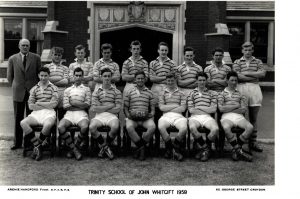 Geoff was appointed Vice Captain of the School in 1958, the equivalent of Deputy Head Boy today.
When he left School in 1959, Geoff went on to read Aeronautical Engineering at Trinity College, Cambridge, having won a state scholarship for further education.

Career-wise, Geoff was always a techie of some sort, initially in the aircraft industry and then in IT. He worked for Hawker Aircraft after University, working on the Harrier jump jet and then on a supersonic vertical take-off aircraft, the P1154. Geoff’s specialty was kinetic heating, evaluating how hot a supersonic aircraft would become at high speed. This was with the benefit of the latest model of slide rule, and the occasional use of a primitive computer, a Ferranti Pegasus.

From the cash-strapped aircraft industry, Geoff transferred to the emerging world of IT, where he worked as a programmer and then as a sales manager and marketing manager. In the final ten years of his career he found a new love – teaching! Geoff spent ten years teaching the rudiments of computing to all ranks of the Ministry of Defence, from the Chief of Defence Staff to the newest recruits.

Geoff was invited to join the Trinity Club’s (TMWA) hierarchy in 1966 at the tender age of 25, which, he told us, seemed a great honour at the time. He held just about every post on the Council over the ensuing 54 years, including Honorary General Secretary, Founders Day Supper organiser, Chairman of the Council and Chairman of the General Committee. During this time, he also served as Secretary and then Chairman of the Hockey Club where he captained every team from the 2nd to the 6th XI.

Geoff has been the ‘Voice’ of the Club over the decades. He edited the magazine for over 20 years and disseminated news across the alumni community through newsletters and other communications, including those sad occasions when imparting news of alumni leaving us, which he handled in a very personal and sensitive way. He developed the first Association website and developed the first hockey club website.
Geoff was involved in re-writing the constitution several times – every time a major change was introduced to the Club’s rules. He was involved with John Parish in preparing the Articles of Association for the Trinity Sanderstead Sports and Social Club, and then did the same job for the revised TMWA.

At a more mundane level, Geoff found himself responsible for the distribution of the TMWA magazine, the AGM notices and any other formal notices issued. This, he claimed, was a big mistake, as he estimated he had to purchase, stuff, label and stamp some 100,000 envelopes during that time, with help from a small band of helpers. For much of the time, envelopes and stamps were not self-adhesive, so this was not the pleasantest of tasks.

Geoff extended the link between the Association and the School by becoming a member of the school’s External Relations Committee. He also established an important link between the Association and the School’s Alumni operation. Geoff was a regular guest at School events, and enjoyed coming in to speak to Sixth Formers about to embark upon life beyond Trinity, to talk to them about the Club and encourage them to use its facilities. Sadly, his dry wit was sometimes lost on the 17-18 year olds, but not on the staff in attendance!

Volunteering was in Geoff’s blood, and despite being kept busy at the Club, Geoff became a magistrate in Croydon at the age of 55, and served there until compulsory retirement at the age of 70. Magistrates handle the early stages of every criminal case, and take over 90% through to acquittal or sentence. He sat as a court chair in the adult and the youth courts, handling cases from shop-lifting to murder. In 2008, Geoff was elected Chairman of the Croydon Bench, taking responsibility for about 150 magistrates. In this role, he was following in the footsteps of other alumni, including John Sinkins and Michael Bone.

After retirement from the magistracy, Geoff volunteered to help at the London Science Museum in Kensington. In this role, he lectured to members of the public on a range of matters

illustrated by the museum’s exhibits, focusing on the history of aviation from the Wright Brothers to Concorde. He often found he learned as much from the audience as they did from him!

Geoff’s talented wife, Judith, attended Croydon High School and graduated from Newnham College Cambridge with a degree in Mathematics. Judith has been by Geoff’s side for nearly 60 years and leant her unstinting support to Geoff throughout his career and beyond. Their sons Stephen and Mark both attended Trinity and are a great credit to them both.

Geoff will be sorely missed by all who knew him.

After a lot of thought the family have decided that it would be unwise to have a large gathering at the crematorium, so regretfully, they are asking you to please not attend on the 18th. There will be a service for the immediate family only.
If you wish, you will be able to watch the service online. The following link will be live on Friday, February 18th just before 3pm GMT and will last for the duration of the service.
Website. https://watch.obitus.com
Username. juxa1424
Password. 525574
The family have been comforted by the many letters, cards and messages which they have received. They plan to hold a celebration of Geoff’s life in the summer, when all will be welcome in much better circumstances.
Thank you for your understanding.
Share
1