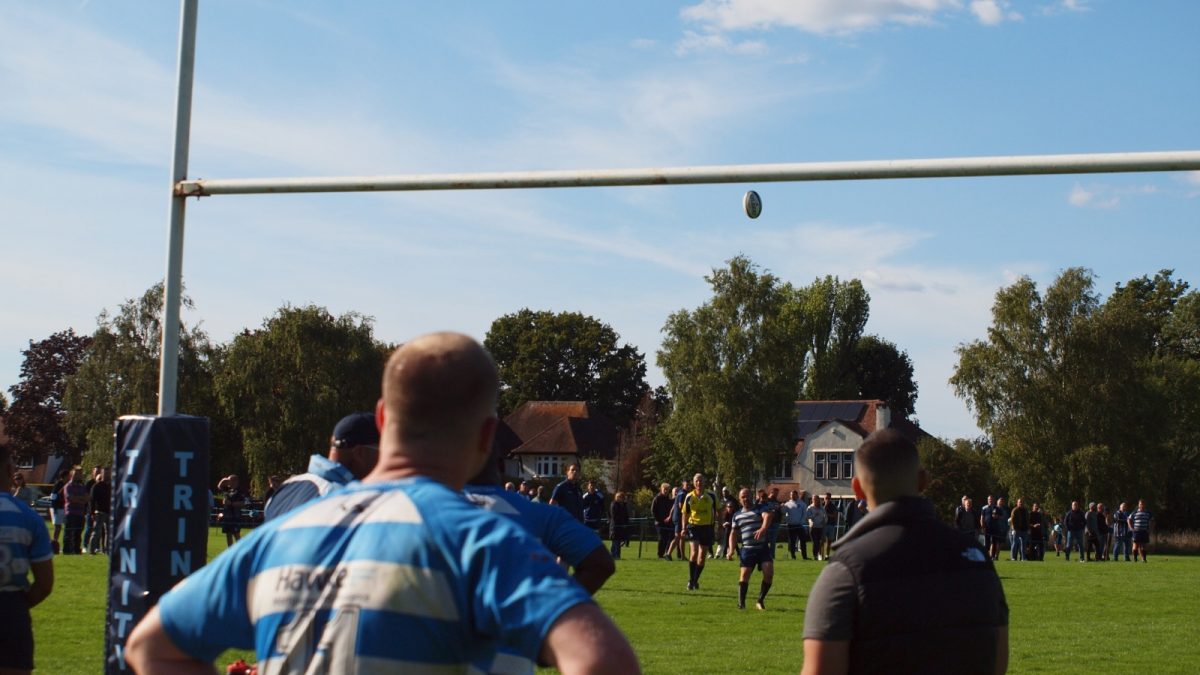 Trinity, having done well last season in Surrey 1, felt that the reorganisation of the leagues had given them a stiff set of opponents, the first of whom had performed very creditably themselves in a higher division last year. It was clear, however, from the start, that Warlingham were not as well equipped as they had been expected to be.

Trinity started with the favouring breeze and were soon on the attack but squandered good positions by losing successive lineouts. The first Warlingham sally was repelled with centre Archie McMillan carrying well. Another lost line-out gave Warlingham possession but when they knocked on, scrum half Harry Wilson was quick to whip the ball out to winger Ben Edmondson who had too much power and pace for the cover. The last defender resorted to a very high and dangerous tackle which resulted in a yellow card for him, and a penalty try for Trinity after 5 minutes. Some pressure from the visitors was well defended and Wilson and fly half Dan Crouch were getting their line moving. A clever kick from full back Jack Greenwood found touch on the 22. Warlingham threw crooked and Mids dominated the resulting scrum, moved the ball swiftly left and Crouch put in Edmondson for a second try after 13 minutes.

The Warlingham kick-off was too long and Mids were again able to boss the scrum with an impressive 8-man push and force their opponents back. A penalty goal from Crouch increased the lead to 15-0. A huge Olly Hubbard turnover for Trinity turned defence into attack and Edmondson broke free to make ground and unload to the supporting Connor McGrath for their third try after 20 minutes. Mids were flying now and produced some elaborate running rugby. They certainly did not lack ambition and, had a couple of long passes gone to hand, the game would have been well won in half an hour.

Unfortunately, the talented Edmondson was injured but his replacement James Hammond fitted in well. Eventually the ball did go to hand and the power now came from the right wing where Max ran at devastating power to hand off tacklers and set up a ruck. Hubbard secured well and patient recycling gave No.8 Dave Spedding the opportunity to crash over and secure the bonus point on 33 minutes. Mouna made another surging run before Warlingham eventually had a period of dominance. For the last 8 minutes of the half, they pounded the home line, forced a number of penalties which they ran and only resolute Mids defence held them out. They seemed certain to score only for hooker Tim Jupp to win a cracking turnover and enable his team to reach the interval with a handsome lead of 27-0.

With the wind at their backs Warlingham had to make their mark quickly if they were to get back in the game. A long kick to touch and more pressure when Trinity again butchered their own line out gave the visitors a strong field position deep in the home 22. Trinity spoiled their attacking line out and had the ball under control, but a rushed kick went all wrong and the ball fell for Alex Nunn to open Warlingham’s account with a try. Fly half Brad Saffrey kicked an excellent conversion from the touchline to make it 27-7.

Back came Trinity and some fine picking and driving forced Warlingham back. On 58 minutes lock Tom Black drove through to finish an accomplished passage of forward pay. Crouch converted and it was 34-7. From the kick off Trinity secured the ball well and started a counterattack. A planned move then went wrong, and they were penalised for crossing. Warlingham worked the position well and Saffrey went over by the posts for a try which he converted. 34-14 after 63 minutes. Trinity had a good passage of play with Adam Stammers carrying well and driving into the visitors 22 on a number of occasions and some fine back-up play from flanker Billy Hickson. A promising move saw Crouch put in a clever kick and Mc Millan narrowly failed to get the touch down in the resulting chase. The same player was on hand, however, shortly afterwards, when Mouna showed his paces again and McMillan registered Trinity’s sixth try with 5 minutes to go. Warlingham kept at it and were rewarded in the last play of the game when Trinity, instead of kicking for touch, decided to open up from their own 22, lost possession and Juai Charles had a simple task to steal a try for Saffrey to convert.

Coach Andy Edwards was very pleased with his team’s performance and singled out Black, McMillan and Hickson for their efforts and the way they blended in with the more established players. The Trinity scrum played a big part in laying the base for such entertaining running rugby.