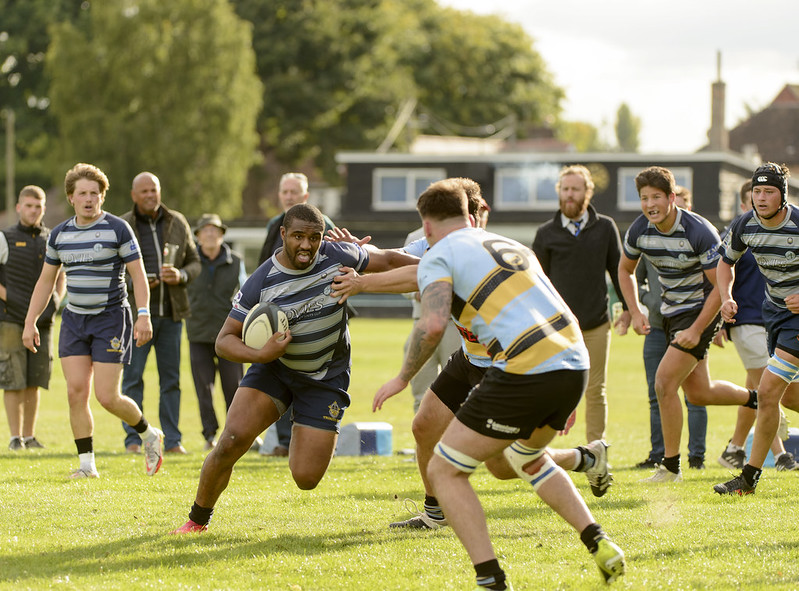 With several changes from last week’s winning side Trinity were expecting a stiff test from another team who were in a higher league last season.

With breeze and slope in their favour in the first half the hosts launched several attacks in the Walcountians’ 22.  Prop Nathan Bacon was just short.  Walcountians were penalised three times in quick succession.  Trinity took quick penalties but failed to penetrate a dour defence so decided on a scrum for the third. A poor pass gave the visitors the chance to clear but No.8 George Daniels fielded the kick and set up another attack.  Walcountians were penalised close in and a lightning quick reaction from scrum half Harry Wilson was too fast almost for himself but saw him unload to Bacon who surged over for a deserved try after 8 minutes. Full back Jack Greenwood converted.

Walcountians now mounted a series of powerful attacks with prop Luke Rayner showing pace and strength.  Trinity held out and, when Walcountians lost control of the ball, centre Temi Okenla pounced to secure possession and feed Ty Williams on the left wing. He sped down the field and, though he still had plenty to do, was too strong for the defence and sored his side’s second try, this time against the run of play. Greenwood’s conversion gave Trinity a 14-0 lead after 15 minutes. Williams and flanker Adam Stammers now suffered injuries and were replaced by Alex Scott and Alessandro Costa.

Walcountians were now dominant for a time with their forwards rampaging in the loose and their backs running freely. Big tackles by centres Okenla and Andy Dean kept them at bay but only a foot in touch denied them in the right corner. Trinity had a chance to increase their lead, but Greenwood was narrowly wide with a penalty attempt.

The visitors kept up their pressure and, when Trinity lost their own line out after 24 minutes Walcountians moved the ball quickly right and were awarded a penalty try when an attacker was tackled high.  They now looked the stronger side but were penalised for back-chat and marched back, giving Trinity respite.  However, another poor line out gave back possession and they levelled the scores after 38 minutes with a try from centre Dany Abou-Zeid, converted by full back Ross Norton.  At the interval Walcountians looked the more likely winners.

Instead it was Trinity who really dominated the second half.  The visitors rarely got a foothold in the home half. Their big forwards seemed to run out of puff and Trinity created surge after surge.  Their scrum was now completely on top and, though they kicked away good opportunities by missing touch with three penalties their tackling was so fierce that they denied Walcountians any sustained possession.  Not content with their destruction of their opponents in the front row, props Bacon and Jacques Bryant were in the faces of the tiring Walcountians and, with hooker Ali Hall, tackled, carried and drove like men possessed. Credit has to be given to the Walcountian defence for holding them out.

Chance after chance was created.  Hall was held just short of the line and Bacon went close again. Eventually the pressure told.  A weak clearing kick was fielded by Greenwood who fed winger Max Mouna. He found Costa in space who made more ground and when the ball was recycled quickly, Okenla burst through and scored. Another good kick from Greenwood added the extras.  Walcountians came again but Mids were winning all the 50-50s and flanker Ben Vaillant made a nuisance of himself and, with a restored Stammers, won several turnovers. Scrum half Wilson had been orchestrating everything and gave an accomplished display of sidesteps and darting runs to keep up the momentum.

Fly half James Hammond put in a classy searching kick up the line and it was he who won the final plaudits at the end of a long period of injury time when Walcountians threatened to steal a draw at the death.  In the final play, in his own 22, he won a brilliant turnover and managed the subsequent penalty well to kick the ball dead.