MIDS MISS OUT ON TOP SPOT 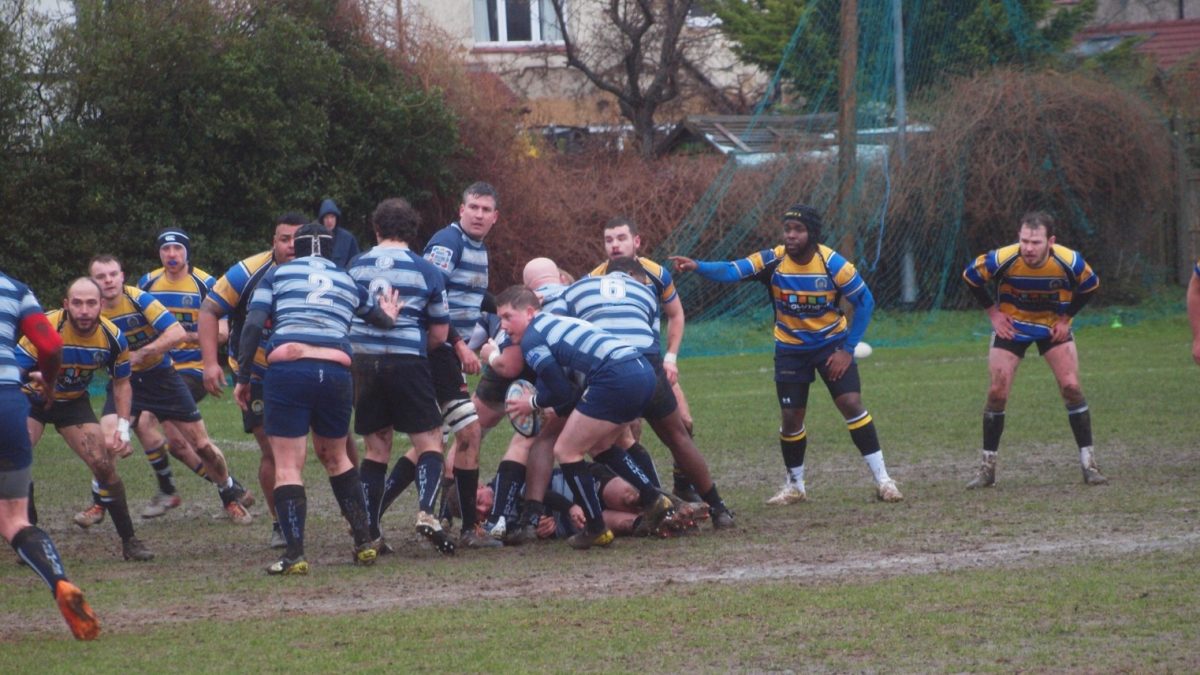 Ruts frustrated the visitors with a mixture of good mauling, dogged defence and conceding penalty after penalty. Mids just could not score and it was only after a yellow card was eventually given to the hosts that they managed to register. From a scrum on the Ruts’ line the ball was fed left and winger Ben Edmonson touched down in the left corner after half an hour’s play. Jack Greenwood’s skewed conversion somehow crept over. 7-0 was a start but one felt that Mids need several more points on the board if they were to face the gale with any optimism in the second half. Rutlish continued their dogged defence and sensibly kept the ball in hand, picking and driving and patiently running down the clock in the conditions.

Trinity created some chances with two promising kicks ahead by Marc McEvily. The first of these was well chased by Rob Farmer but it just rolled into touch and the second, a beautifully place cross-kick was knocked on. Scrum half Jack Greenwood created another chance when he nailed his opposite number but Ruts survived to the interval, well pleased by their efforts against the elements.

As expected, the home side kicked for territory. Two excellent catches under pressure, one by Ben Telfer and the second by Farmer gave heart to Trinity and they embarked on their uphill struggle with determination. They did concede a kickable penalty but this was missed by Ruts. Trinity matched their opponent’s earlier efforts in defence and made much more territory with a dominant scrum and some very productive mauling. Veteran prop Dom Plumb produced another First XV 80 minutes that players half his age (the majority on the field!) would envy. They forced Ruts to concede more penalties and the hosts were given another yellow card for a deliberate knock-on. Trinity were now dominating possession and a penalty allowed Telfer to put in a good kick to the corner. Though Mids lost this crucial line out, they stuck to their task and came again to force their way into the 22.

Two more penalties were conceded by Ruts and Trinity chose a scrum on each occasion. The second of these scrums was well controlled and they pushed Ruts over the try -line . A jubilant George Daniels got the touchdown. The conversion attempt was missed but the longer the game went on the more a comfortable Trinity victory (in uncomfortable conditions!) seemed likely.

But then everything changed with 5 minutes left. An injury to Mids’ talisman and prime tackler Temi Okenla meant that the visitors’ defence was more vulnerable and Rutlish successfully targeted this area to run in a try on 77 minutes. In added-on time they repeated the feat and a large home support contingent found their voices. There was some more injury time to play and Trinity gave it everything. They had a fine chance when they won a penalty inside the home 22 and opted for the scrum that had produced their earlier try. This time the Ruts’ scrum held firm, though the referee was playing penalty advantage to Trinity.

McEvilly was given the chance to win the match with a kick from the 22 but 22 metres is a long way into a gale and the kick drifted wide. Trinity were gutted after such a gritty second half display but will rue all the opportunities they had early on to score the points needed.