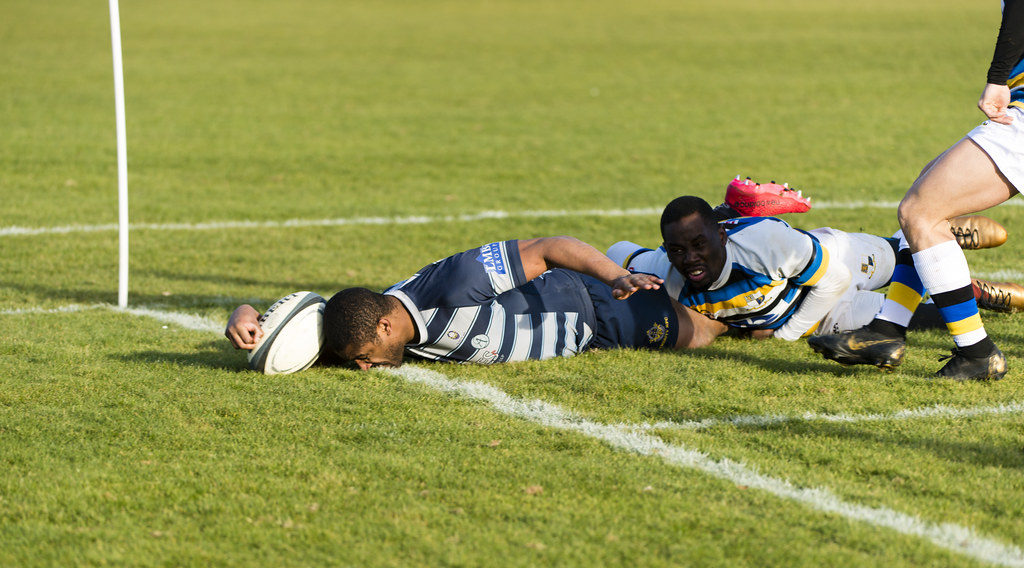 Purley John Fisher must be well fed up with being just the wrong side of the scoreboard in this local derby which has produced yet another narrow victory for Trinity.

A very strong wind made conditions difficult.  The home side dominated possession early on and Farooq Agbalaya, returning after a long absence, carried well.  Trinity had chances to create strong positions but two missed touches from penalties wasted these opportunities.  Then, out of defence Fisher set up a sweeping attack which was stopped by a powerful tackle by Marc McEvilly.  Fisher were then penalised and Dan Crouch expertly measured the wind to stroke over the opening 3 points after 12 minutes.  He repeated the feat 3 minutes later after a long kick ahead by Mc Evilly was well followed up by Mids and Fisher infringed again.

From the kick off the ball did not go 10 and the powerful home scrum won good ball but then messed up possession and Fisher were quick to pounce and good handling right and then left, aided by some poor tackling from Trinity, produced a try for Dan Wilkinson.  The same player gave the visitors the narrowest of leads with an excellent conversion after 22 minutes.  Trinity had a further chance pf exerting pressure but touch was missed again.  They won two more penalties and these were better dealt with, leading to an attacking line out in the corner.  However, the hosts made a mess of this and Fisher, who were very dangerous on the counter-attack, skilfully ran the ball back upfield and were denied a score only by a forward pass when their winger was in the clear.  Fisher were now dominating and some silly Mids backchat when they were penalised on halfway conceded enough ground to make the penalty kickable and Wilkinson was just short into the strong wind.

Fisher kept the pressure on but a strong run out of defence by Max Mouna raised the siege.  A couple of penalties saw them work their way up the touchline to an attacking line out, but this was lost and Fisher won a scrum.  They took  this well but a silly error meant that they conceded a penalty and Crouch obliged to regain the lead for Trinity after  39 minutes.  In time added on George Daniel, who put in a big shift in the tight and around the park, won good line out possession on halfway and the ball came to Temi Okenla in the centre.  He saw a gap, changed, direction and accelerated past several tackles for a spectacular try in the corner.  Crouch produced a magnificent kick from the touchline, into the wind, to add the extras and Trinity were 16-7 to the good at the interval.

Mids knew that they were against the wind in the second half but took play into the visitors’ half.  When Fisher won the ball, they elected to run it rather than utilise the wind and Trinity were happy to keep them in their own half. A bizarre incident then denied Okenla when he would have been clear, but a pass which went back off the head of a Fisher defender was judged to be a Mids’ knock-on and everyone had to get on with it, including the scribe who was told to calm down!  Fisher now won a penalty and Wilkinson found touch in the corner.  This time it was the visitors’ turn to mess up the line out chance and Trinity cleared. On 52 minutes Fisher won another penalty on halfway and this was taken quickly. Poor Mids’ tackling allowed the elusive Wilkinson to go all the way to the line and then emulate Crouch in converting from the touchline to narrow the gap to 2 points.

The remainder of the game saw Trinity dominate but knock on innumerable times.  Fisher threatened to counter and the Trinity scrum was driven back several yards to win Fisher a penalty. Mids redeemed themselves with a number of turnovers, with Olly Hubbard outstanding in this regard.  The clock was winding down and it seemed that Trinity had done enough but Fisher produced one last attack and threatened to steal the game.  Trinity held out and a tackle into touch brought the final whistle.