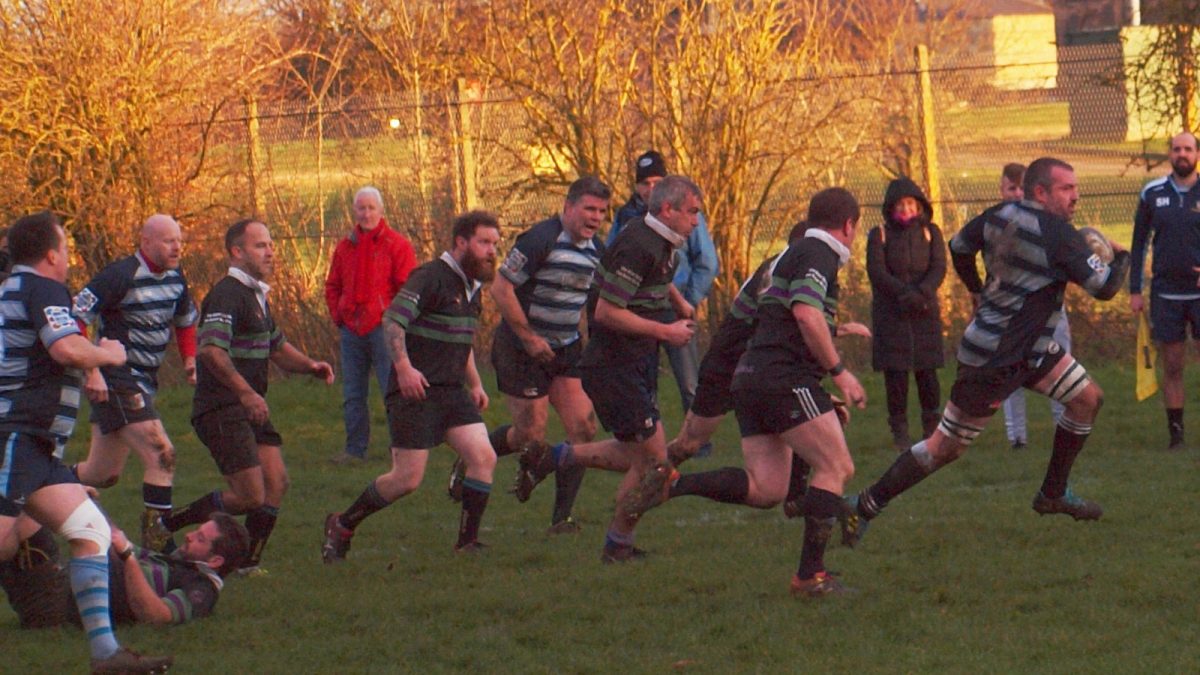 Trinity Vets travelled to Walton-On-Thames for their Vets Pitcher fixture against Weybridge Vandals Vets; Conditions overhead were good but the playing surface was very heavy and difficult underfoot.

For the first 27 minutes play went backwards and forwards with Trinity dominating possession but unable to convert into points down to dropped passes and poor breakdown work.

28 minutes – Vandals got into the Trinity half for the first time but lost possession due to a turnover, Crouch looked up and was about to kick ahead but received a call from Macaskill who took the pass and found a huge gap in midfield, sailing through at pace to score under the posts – 7-0.

From the kick off Trinity took the advantage and Crouch kicked through – Stanton chased and hacked on clear of the defence and would have scored but Harrington beat him with gas for the touchdown. Good conversion from Crouch – 14-0.
36 minutes – great arrows from Jupp & Oliver meant Trinity secured good line out work which off the top created a searing break by Stanton who fed Glover for an impressive try. Crouch converted 21-0.

During injury time Vandals got their act together and were besieging the Trinity line with continued forward drives; defence was excellent but Trinity received a number of calls from the referee on and were penalised several times. This culminated in Crouch receiving a team yellow card and resulted in a Vandals score in the 42nd minute. 21-5 at half time.

2nd half and Vandals kicked off straight into touch; Trinity attacked from a scrum on half way however a Trinity knock on when in space gave Vandals a scrum and the 9 ran in unopposed for a try. Conversion made it 21-10 and then Vandals had 10 minutes camped in the Trinity 22. Heroic defence held them out with tackle after tackle being made and eventually Trinity broke away and some pinball play brought them an attacking position close in. Patience paid off and Macaskill dived over for his second try 18 mins into second half – 28-10.

54 minutes – Vandals were on the attack however turnover ball gave Trinity a good counter and Macaskill some tight space on the left. Strength, determination and sheer cussedness saw him crash over for the hat-trick. Crouch narrowly missed conversion – 33-10.
Last minute – a swashbuckling move from Trinity including build up play from Butterworth and Macaskill with almost everyone handling before Tim Jupp gleefully claimed the final try of the game.

Overall a good win in tricky conditions against a strong side who competed very well especially at the breakdown and set-piece. There were several contenders for MoM, Neil Bell tackled heroically in midfield, Dave Stanton made several line breaks, Macaskill scored an impressive hatrick, Jon Riches carried well in broken play, Mark Butterworth with a usual workmanlike performance. However, the oppo chose Dan Crouch for an excellent display from 10/12.