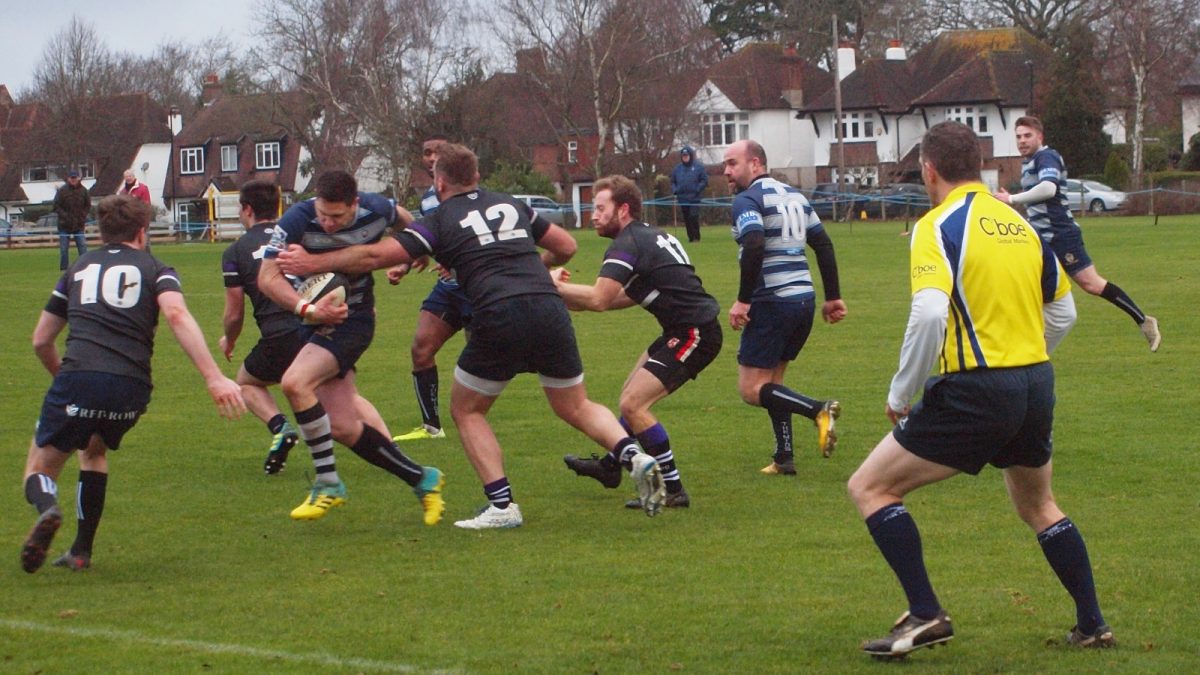 Trinity took on the league leaders on a windswept Lime Meadow Avenue. In the corresponding fixture in the autumn an understrength Trinity side had received a drubbing from Law Society but this match saw a much more even contest.

The hosts scored first when a quick heel from the visitors shot the ball out of the scrum and centre Andy Dean was up quick to claim possession and set up the platform from which flanker Farooq Agbalaya crossed for a try after 3 minutes. Fly half Dan Crouch converted for a 7-0 lead.

3 minutes later an instinctive reaction from lock Iain Munro was considered a high tackle and he received a yellow card. Law Society laid siege to the home line but great defence by Trinity, with centres Dean and Temi Okenla excelling, kept them out. A 7 man Trinity scrum was heroic in holding its own but eventually a penalty was conceded and fly half Lloyd James opened the scoring for the visitors after 14 minutes. The same player had a further penalty kick on 26 minutes when Trinity were not releasing and he had some luck with a flat kick that went over to reduce the arrears.

Trinity now worked their way up field against the strong wind and set up a maul in the corner but this was well defended. From the resulting Law Society scrum their powerful `No.8 picked up but was tackled and driven back over his own line by Trinity scrum half Matt Hoyles. Trinity had a good chance to score from the resulting 5 metre scrum but the ball was lost and the visitors cleared downfield. On 34 minutes Trinity winger James Jenkins was carded for a deliberate knock-on and James kicked his third penalty to give a 9-7 lead to Law Society at the interval.

With the wind in their favour in the second half Trinity began confidently and, when Crouch’s long kick-off was not secured by the visitors, winger Jack Greenwood was up quickly to force a turnover and set up the chance for prop Nathan Bacon to crash over for a trademark score. Crouch converted and Trinity were back in front at 14-9.

Law Society were quick to respond and, only 4 minutes later, James broke and scored under the post for a try which he converted himself to put his team back in front.

Trinity regained the lead on 49 minutes when George Daniels took good line out ball and a change of direction opened up space on the right with Trinity there in numbers. A deft kick through from Crouch was hacked on by skipper Ali Hall and Jenkins was up in a flash to claim the ball and dive over.

Trinity now sustained a number of attacks and Crouch did not get the chance to use the wind to boot the ball downfield. On 66 minutes Trinity chose to keep it tight but were dispossessed and Law Society won a line out in the corner. This they executed well, as they had done all afternoon, and, when they set up the maul, all the backs bar one joined a 14 man drive to claim the try. The conversion was missed but the visitors now had a valuable lead of 21-19 with 10 minutes remaining. Defences were now on top but Trinity had one chance on 72 minutes when Crouch elected to kick for goal from the 10 metre line when Law Society were penalised for offside. He struck this beautifully and it proved the decisive score. However, Trinity had to defend against fierce attacks from the Society who should have scored but dropped the ball on the line. Trinity gained possession on their 22 with 2 minutes remaining and produced copybook ‘pick and drive’ rugby to force play 50 metres upfield and close out the game.

Coach Andy Edwards was very proud of his team and singled out flanker Rob Farmer and hooker Adam Stammers for special mention. Hoyles also had an excellent game and the defence typified by Dean and Okenla was a huge factor in this win against a team with a very talented back line. Trinity’s tendency to lose concentration (and sympathy!) when complaining about decisions that do not go their way, did not help them early on but they improved in this respect and will need to maintain this improvement if they are to advance up the table.