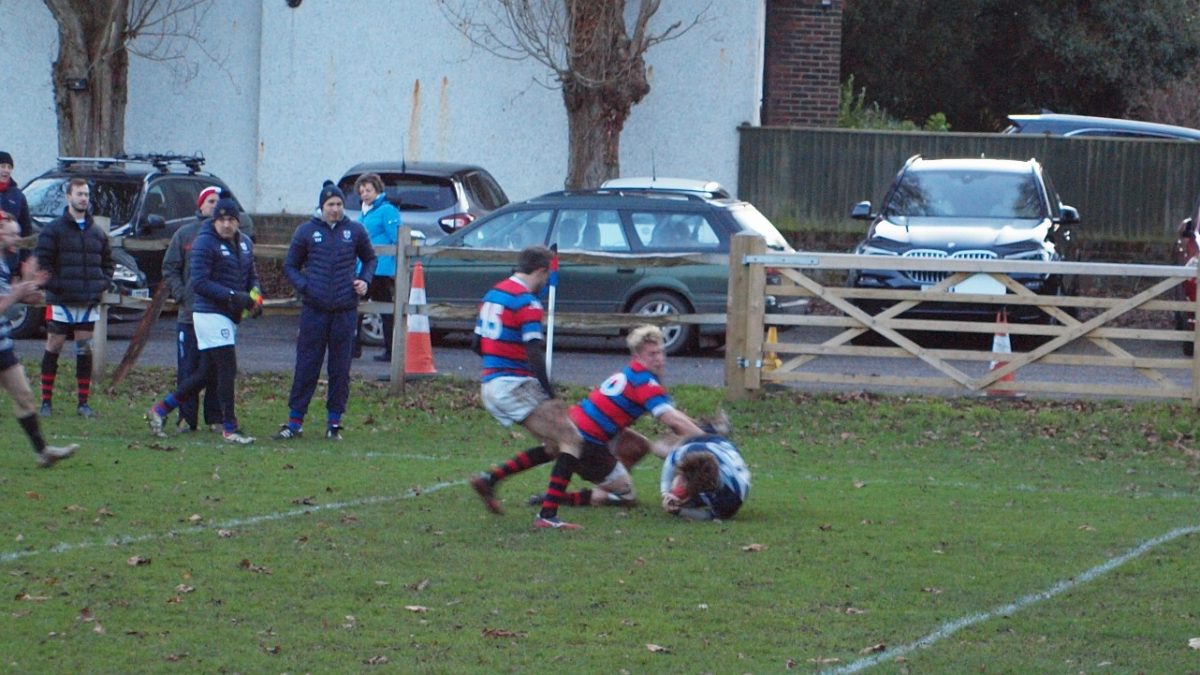 The second local derby in a couple of weeks, this time in the league, produced an entertaining if rather disjointed match.

Whits were the tidier side, doing the basics well and handling impressively to keep the ball alive.  Trinity had some good possession but with regular kicker Dan Crouch unavailable lacked a place-kicker, which proved costly in a tight and low-scoring game.  The visitors won a number of turnover penalties but quick taps or kicks to the corner did not yield dividends and when Whits recovered possession the excellent line kicking of their full back won ground back in spades all afternoon.

A line out in the corner after 17 minutes gave Whits a strong platform and, though Trinity defended well, the hosts were patient and clinical and prop Barney Hoskins got the first try.  7 minutes later, what seemed like a fine tackle by prop Jacques Bryant did not fit the referee’s interpretation and Trinity suffered their first yellow card.  Centre Jordan Lewis kicked the penalty to make it 8-0 to Whits.

The 14 men competed well and took the game to their opponents.  A number of assaults on the home line promised a score but good surges by centre Temi Okenla and both Sullivan brothers, Liam and Tom yielded no points and two attacking line outs were lost to increase frustration.  In this period Whits had two men carded.  Shortly before half time scrum half Tom Sullivan beat several defenders in a characteristic mazy run but, just as it seemed he must score, a slip cost him his chance and Whits escaped.

Trinity sustained the pressure at the start of the second half but the Whits’ support at the breakdown was quicker and they won a number of crucial turnover penalties.  Fly half Liam Sullivan won a good turnover of his own after 50 minutes and when Trinity attacked shortly after he made an incisive break.  From the ruck flanker Alex Scott gained ground towards the line and lock Matt Shillabeer was up in support to crash over for a well deserved try,

Whits now had a period of domination when  Shillabeer was yellow carded and Scott suffered the same fate shortly after.  The 13 men weathered a number of storms well with flanker Ben White outstanding and props Jack Whitewood and Bryant carrying well.  However, on 70 minutes Trinity had no answer to a lovely break by Whits fly half Matt Clark who dummied inside and then injected pace to speed to the line for their second try.  A second card for Whits allowed Trinity to regroup and create a number of chances and they were rewarded 5 minutes from the end when Liam Sullivan opened up space on the left and the ball was moved swiftly along the line for winger Max Mouna to produce the scoring pass for full back James Jenkins .  Trinity tried hard for the winning score but Whits managed the game well to close them out.

This was the youngest ream Trinity have put out for a long time and if they can find a bit more cohesion they will do well in the New Year.