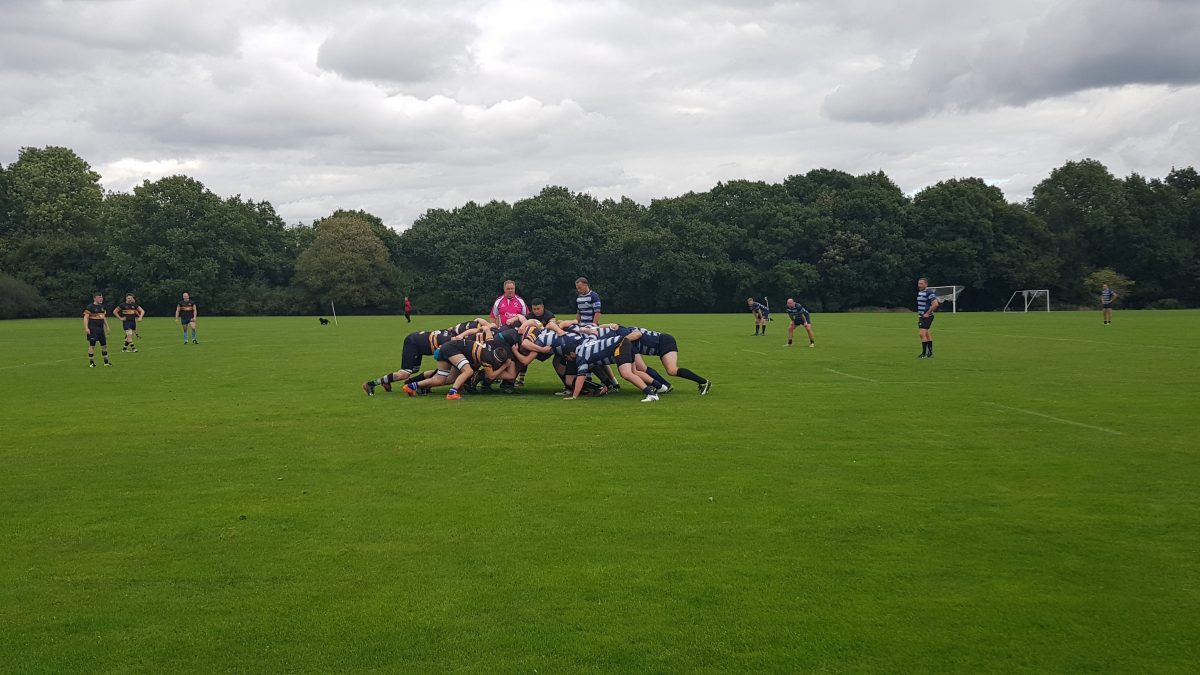 An interesting afternoon for an A XV with what a chef would consider a sublime mix of barely ripe and long rotted fruit, but a rugby team thinks of as a desperate plundering of the veterans to make up the numbers. The visitors appeared to be a far more youthful outfit, but they did hide a couple of old timers during the warm up and with the lack of years came less bulk and experience compared to Trinity.

The match got off to a lively start as the home team failed dismally to deal with the opening kick-off – new name, same old organisation gap. Where the game started in near extraordinary fashion was that we could easily have had a Simon Harrington hat trick in the early stages. The first try went begging when agoraphobia led him to ignore a wide space and be tackled by three defenders. The next was the opening score, where not only did Laurence Oliver pass the ball five metres from the line (second occurrence of that in the 21st century) but he dummied to Harrington and popped it inside to Alex Glass for a debut try. And soon afterwards when wide open Mr Harrington misjudged a cross-field kick right on the OC’s line, leading to a stream of helpful advice from Zou Mihramane.

Ten minutes after Mids had taken the lead, OCs levelled the score at 5-5 in one of those moments that drives the supporters insane. After an injury stoppage, OCs took a quick penalty and the inside centre ran untouched in an arc to his right for a score. The referee brought it back to retake, either for the game not having properly restarted or taking it from the wrong spot. The Trinity defence was utterly confused by the concept of the same player running the same move, but this time off to his left, again untouched. In the Victorian era this would have been considered to be cheating. Now we expect the defenders to be paying attention.

Soon afterwards some determined chases of a long, and some may say aimless, kick allowed Glass to pinch a second try. From here Trinity began to take the game over and OCs were not helped by a couple of injuries where the substitutions led to serious shuffling of the positions. By halftime the lead had extended to 22-5 via scores by Doug Shard, following a wildly indirect meandering run from Mihramane, and captain John Bocking pinching one off of a line out. Persistently scoring out wide did mostly prevent the conversions, but Bocking landed one from out on the touchline.

Early in the second half a further try was added as a whirlwind of flailing arms and legs plus some rather risky ball carrying technique by Andy Edwards brought him in from five metres out and then his coaching instincts cut in on the next score. With OCs kicking for touch, Edwards advised Simon Manning “let’s run this back and score.” OCs duly missed touch, Manning ran it back most of the 70 metre distance, but it was an Alex Gough hat trick that resulted. Money cannot buy psychological coaching on that scale. With Cats incurring a yellow card for a trip, the game drifted into peace and quiet with a try for Simon Manning and a fourth for Glass on his A XV debut.

Although the backs snaffled all eight scores, the pack did an excellent job of wearing down the opposition which accounted for the opportunities available in the second half. Jarad Parcel in particular delivered a complete hooker’s game and the front five as a group provided a solid platform for the aged eight/nine combo to creak into action.