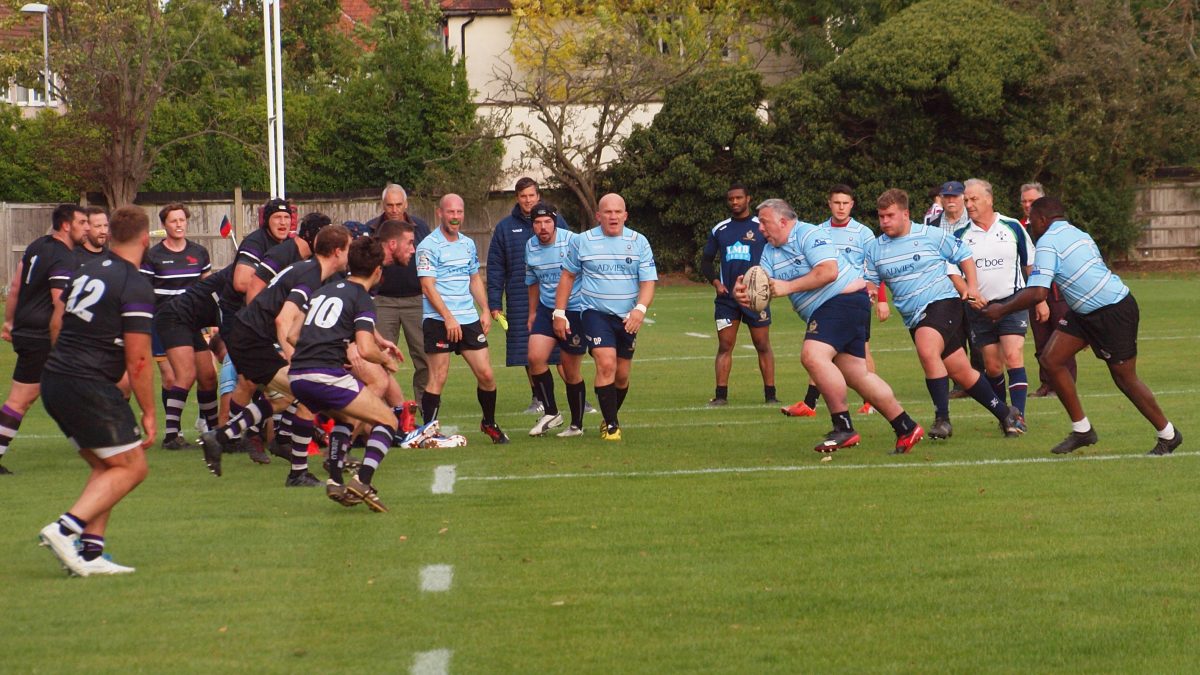 Following the previous week’s victory Trinity came down to earth with a drubbing at the hands of a very lively Law Society outfit.

The home side scored in the first minute, taking advantage of a loose pass to send centre Sam Brewer in for a soft try.  Mids were under severe pressure but centre Temi Okenla tidied up well and lock Ryan Williams effected a turnover at a maul. Rob farmer, playing at scrum half, made a strong break and the next phase saw Farooq Agbalaya  power upfield .  Centre Marc McEvilly took the ball on, chipped ahead and gathered to score – a fine reply from the visitors.  Fly half Dan Crouch kicked the conversion and the match seemed evenly poised after 7 minutes.

Law Society had the advantage of the slope and a good wind at their backs and their speedy runners allowed them to launch counter-attacks when Mids had struggled up the field.  After 17 minutes they set up a maul close to the visitors’ line and several backs piled in to drive Alex Spurgeon over for their second try.  They now put on more pressure but Williams again did well to turn over possession and No.8 Ian Munro was putting in a dour shift to stem the tide.  On 28 minutes, however, Trinity were penalised and were slow to organise their defence.  Law scrum half Tom McLean took a quick tap and scored.  The Mids scrum was strong all afternoon but their line out was disastrous and this put them under a great deal of pressure.  They defended well until the end of the half and were on the attack when a knock-on lost them possession and Law broke away to score again.

Trinity were soon back on the attack and had several drives at the line but had to settle for a Crouch penalty.  They were 27-10 behind at the interval but felt that with wind and slope in the second half they could get back in the game.  Unfortunately they then suffered several injuries and lost three key players in Okenla, Williams and Fuad Agbalaya. They were forced to play with 14 men for much of the second period. Law Society had much better resources and took advantage to score 4 more tries.  Mids gallantly stayed at their task with Crouch directing the defence and with winger James Jenkins, though getting little opportunity, eager for work and showing good speed. Russell Jones gave a typically defiant display. They scored a good try after a fine move involving several players and putting prop Jacques Bryant over for a try which Crouch converted.

Against overwhelming odds they had fought well and the scrum can take great credit for holding their end up.