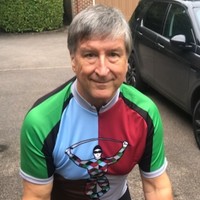 We are saddened to report that former player Chris Neal has died suddenly at the age of 60.

Chris was a prop and popular member of the club during the 80s and 90s. He went on to play for Askeans in a higher league and then with Harlequins and Bath, all in the days before the professional leagues.

While at Bath, he ran a pub and gave lodging to a couple of first teamers (also former England Internationals). One Saturday morning he took a telephone call from John Hall, who asked if he was free and if so , could he get to Heathrow with his boots as quickly as possible. The England Vets were playing in a tournament in Holland and were short of a prop: which is why Chris is front and centre in an England team photo in full kit alongside the international greats of the late 80s. As far as we know, the only Midwife to play for what in essence was the England Extra B XV!

In recent years, Chris became an ultra-long distance rower, often competing on an international basis and was also an aspiring Ocean Rower, with longer term plans to enter the transatlantic single-handed competition to raise funds for charity.

CHRIS’S FUNERAL will be at St Peter’s Church, Limpsfield, Oxted, Surrey at 11am on Monday 14 October 2019.