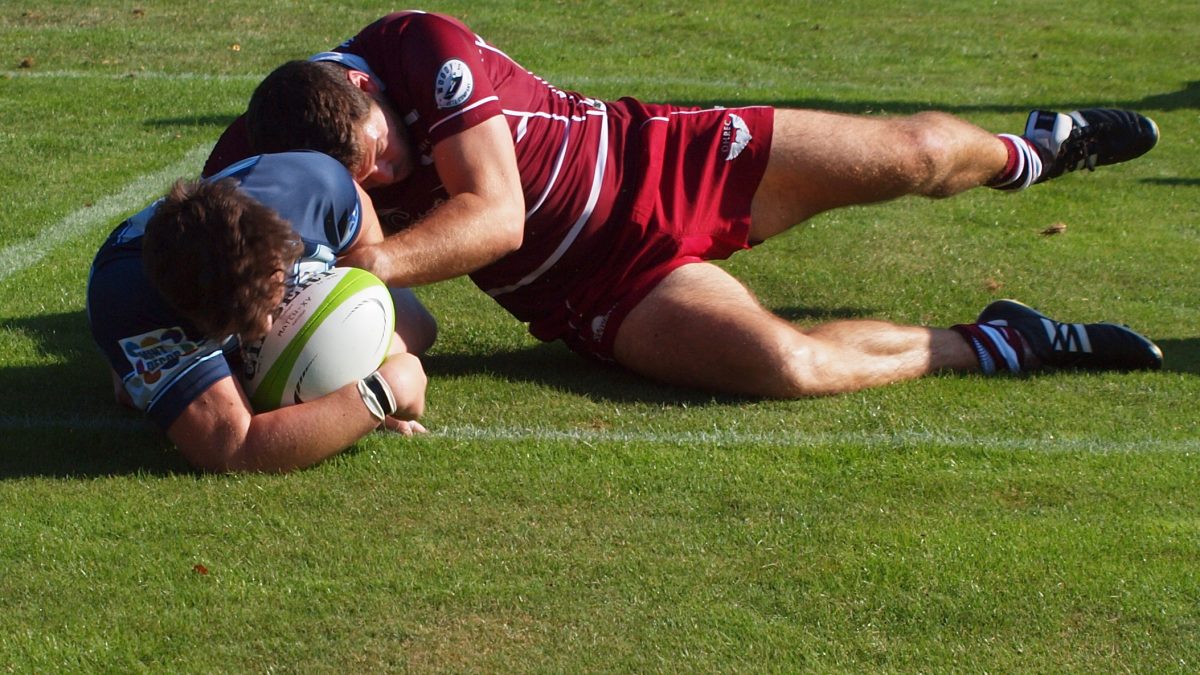 Both sides were keen to entertain and Trinity were first to attack with a smart attack to the left corner but a knock-on allowed the visitors to come back at pace.  They proved very threatening but some determined tackling from winger Temi Okenla and flanker Adam Stammers snuffed out the challenge.  Scrum half Harry Wilson was prominent around the fringes and Ryan Williams and Dave Spedding took good line out ball.

Mids (despite the name change the name sticks!) were making some mistakes, however, with some missed touches and a struggling scrum.  After 18 minutes a strong scrum from Haileybury in the Trinity half gave the opportunity for a long probing kick.  This bounced well for winger Will Bates who gathered to score in the corner after 18 minutes.  Trinity now came in force and created some good positions but, when they  moved wide in space, they dropped the ball with the line beckoning.  A clearing kick nearly put the visitors’ winger in but skilful play by winger James Jenkins saw him launch a counter attack. The ball was moved to Spedding on the left who made ground and unloaded to full back Marc McEvilly who was up in support to gain the touchdown.  Fly half Dan Crouch converted with a fine kick from far out and Mids had gained the lead after 22 minutes.

The hosts now had a period where things were not going in their favour with penalties and 50-50 decisions going to the visitors.  A penalty at the breakdown gave Haileybury full back Sam Hine a chance and he kicked it to regain the lead after 25 minutes.  The visitors were now on top and exploited their dominance in the scrum and some uncharacteristically poor tackling from Mids when Matt Thorogood scored their second try. Hine converted to stretch the lead to 15-7.  Mids did well to hold this score line as they were making things difficult by butchering two line outs and missing a penalty to touch.  Fine tackling from centres Andy Dean and Matt Shields kept the line intact and more of the same from an inspired Okenla kept the home side in the game and they reached half time without conceding any more points.

The second half proved more rewarding to Midwives.   They gained more territory, won turnovers and had the advantage of an extra man when one of the opposition was carded for a dangerous tackle.  On 46 minutes Haileybury were offside and Crouch slotted the kick to make it 15-10.  The scrum too had steadied up and when a promising move materialised, only a lone shout of “forward” spoiled the expectations of the home supporters who were adamant that it was a good pass.  Haileybury had a three chances to stretch their lead in the second half but missed two of the kicks and, when they decided to kick the third to touch, kicked the ball dead.  Mids were not so prodigal and a quick tap penalty gave Okenla the chance to produce a mazy run of 50 metres.  At the breakdown Haileybury were again penalised and Crouch narrowed the gap to 15-13 on the hour.

Mids now lost their captain Ali Hall to injury but the scrum, with veteran Dom Plumb putting in a full shift and with able support from another evergreen, Russell Jones, did a wonderful job in this vital sector.  On 74 minutes Crouch decided to go for the posts with a difficult penalty chance and when one saw the effortless way he stroked it over one could only stand and applaud.  This gave Mids the lead and they sensibly picked and drove and were jealous of their possession.  A late tackle on Crouch gave him another 3 pointer and, from the kick off, flanker Brume Umokora , who had impressed all afternoon took the ball and drove forward to the half way line.  Wilson picked up, saw a gap and outpaced the cover for a try which put the result beyond doubt. Crouch rounded off a perfect place-kicking display with the conversion and Trinity were transformed from unlikely to comfortable winners.