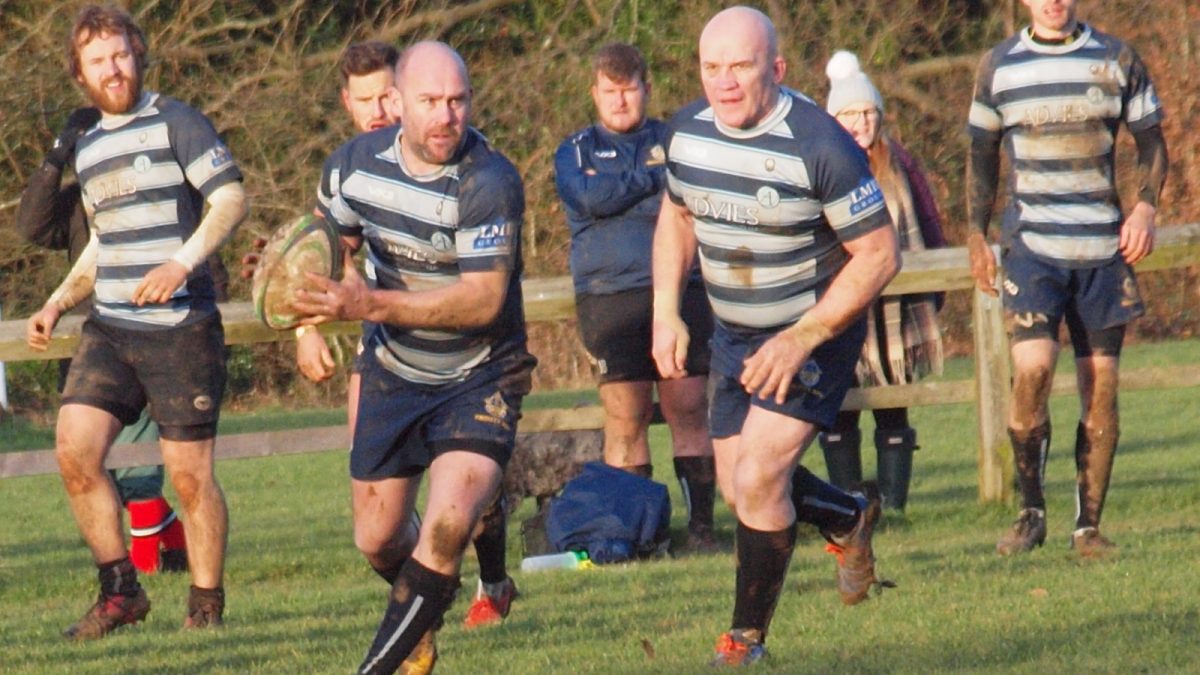 Disciplined win for Trinity in an entertaining match at Parsons Pightle.

Trinity dominated the opening 10 minutes. A strong run by Skipper Ali Hall found a good field position and prop Nathan Bacon was held up just short. Eventually, as Trinity continued to batter the home line, they were playing a penalty advantage, but this was harshly reversed and Fisher survived. Trinity came again and a flowing move on the right promised dividends until a smart interception by Purley winger Kareem Williams gave him a free run from his own 22 to the posts. Fly half Dan Wilkinson converted and Trinity were 7 points down, completely against the run of play, after 10 minutes.

Trinity were soon back on the attack and produced some good running rugby with full back Marc McEvilly carrying well. A couple of marginal passes were called forward but after 18 minutes they got away with what looked like an obvious one and they took play to the left corner. George Daniels took good line out ball and set up a driving maul from which Hall scored. Fly half Dan Crouch slotted a fine conversion from a narrow angle to tie the scores.

Trinity continued to press and they forced a number of penalties but then butchered a line out to waste one opportunity and, despite some strong drives at the line, came up against dour Purley defence. The pressure told eventually and centre Andy Dean won a turnover on the 5 metre line. The ensuing scrum drove the hosts back and scrum half Matt Hoyles pounced to score. Crouch’s conversion gave the visitors a 14-7 lead.

Fisher now had the better of the exchanges in the last 10 minutes of the half and Trinity had to defend well to sustain the pressure. After being under the cosh for a full five minutes of fierce assault, Hall won a turnover and Trinity cleared. Before half time they managed a rolling maul which advanced 50 metres up the pitch but this broke down and half time arrived.
The sides were evenly matched in the opening minutes of the second half. Centre Temi Okenla made some fine carries for Trinity but Fisher were back level after 43 minutes when clever back play enabled scrum half Jack Kennedy to breach the defence and score under the posts. Wilkinson tied the scores with his conversion.

Trinity came back and flanker Dave Spedding made some powerful runs. A fine break from winger Tim Mash nearly yielded him a score. The Trinity forwards were now getting the upper hand and the slight slope was helping them. They forced two more penalties and chose to go for line outs. After 51 minutes Daniels, who was imperious in his line out catching, set up the drive again and Hall got his second try. Trinity were now well on top and playing on their strength up front. 6 minutes later another penalty to the corner gave them the opportunity to repeat the exercise with lock Iain Munro getting the touchdown. Trinity were now leading by 24 points to 14 but Fisher showed good spirit and came back into the game with a try from centre Iain Greenwood after another well worked move from the backs. This reduced the gap to 3 points.

Trinity increased this to 8 points 5 minutes later when a clever kick from Crouch forced Purley to concede a 5 metre scrum. Coach Andy Edwards reorganised his scrum, restoring the powerful tight head Jacques Bryant to the front row, and the scrum did the rest with a push over try. Daniels was the deserving scorer.

Fisher, to their credit, refused to lie down and once again produced good running to send centre Callum Law in for the closing score. Trinity had visions of a nightmare ending such as they had endured on this ground before, when a last minute breakaway try snatched victory from them in the past. However, they stayed solid to close out the game. Credit to both sides for an entertaining game in heavy conditions. It was pleasing to see much more discipline in the Trinity ranks which enabled them to direct their focus to playing rugby.