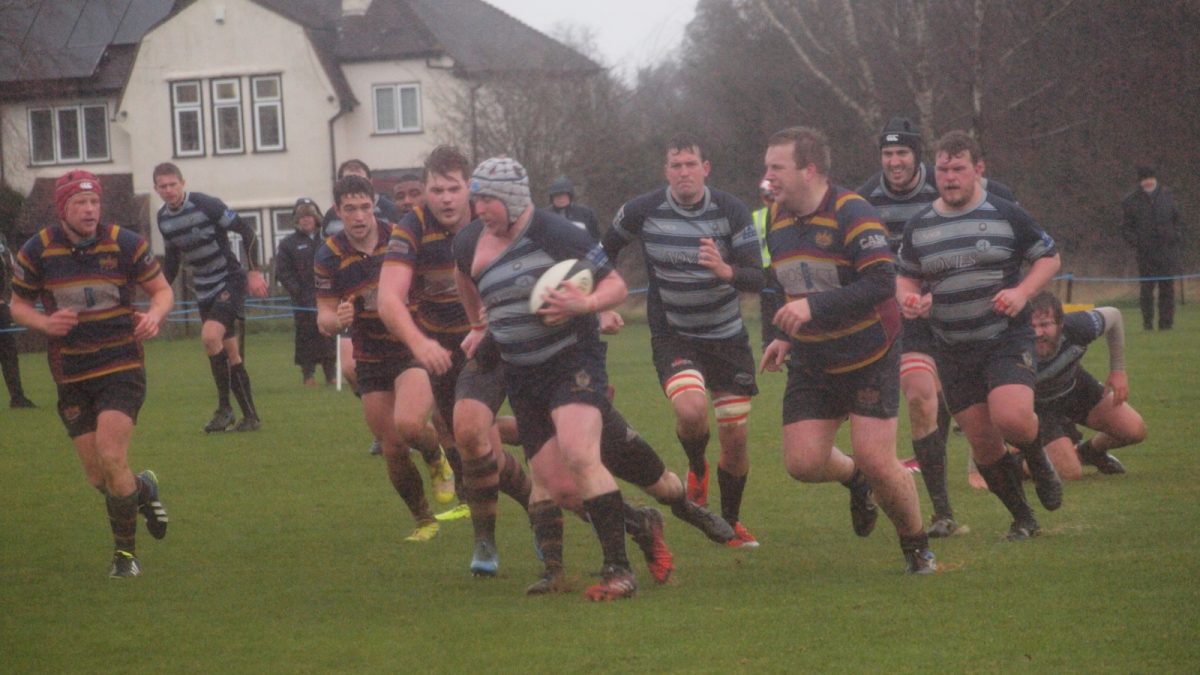 With storm Dennis doing his worst it was inevitable that the old cliché of ‘a game of two halves’ would be in the minds of all watching or playing at Lime Meadow Avenue on Saturday.

Trinity started against the gale and were doing remarkably well for the first quarter. They dominated possession, with the scrum overrunning their opponents and sound, sensible play out of defence. No. 8 George Daniels showed the way and lock Dave Spedding carried well.  When Freemens did make a break, a solid covering tackle by fly half Liam Sullivan snuffed out the danger and a strong run by flanker Rob Farmer restored the territory lost.

In their first significant foray Freemens took advantage of a careless Trinity kick and surged into the home 22.  They forced a series of penalties and eventually were rewarded when scrum half Max Davies crossed by the posts.  Full Back Gus Noble converted and the visitors led 7-0 against the run of play after 25 minutes.  Trinity returned to the attack and had a huge chance when they drove into the 22 with purposeful picking and driving.  Lock Nathan Bacon took the ball on to within 5 metres of the line and set up a ruck, but from the next play the ball was spilled forward and Freemens did well to clear.

On 33 minutes Trinity were moving the ball confidently out of defence but Freemen’’s hooker Alex Moodie read the play well and intercepted to speed to the line for his side’s second try and Noble’s conversion made it 14-0.  The visitors’ tails were up and they exerted further pressure to set up a fierce driving maul which went all the way, prop Ian Moodie getting the touchdown. Noble added the extras and 21-0 was a good lead after 38 minutes.  Trinity came again and, with half time looming, were awarded a penalty inside the Freemens’ 22.  A scrum seemed the right option in the conditions but instead the decision was to kick to the corner for a line out.  The touch was missed and the visitors were well pleased with their interval lead.

Trinity expected a much easier passage in the second half with the wind in their favour but Freemens played the conditions well, giving the home team little space and retaining their possession skilfully.   Eventually Trinity scored on the hour from a driving maul, with skipper Ali Hall claiming the try.  Full back James Jenkins converted.  Freemens dug in again and kept Trinity well away from their line.  The hosts did score a second time when a series of scrums ended with a pushover try.  Temi Okenla had moved to scrum half after an injury to Tom Sullivan and he claimed the touchdown, though Ryan Williams was on hand in support.

Again Freemens showed great resilience and Trinity got frustrated, suffering two yellow cards in their endeavours to level the scores.  The visitors closed out the game and were deserving winners, though this had not looked likely earlier in the game.

Once again Trinity played the referee poorly and  will have to renew their efforts to be disciplined if they are to return to winning ways.  There were some fine performances from Farmer, Jenkins, Okenla and Bacon and the scrum was a ruthless and impressive unit.  Freemens could not match the Trinity power on the day but were more measured and consistent.

Credit is due to all who made the game possible in such appalling conditions and thanks to our sporting visitors who helped to collect flags and equipment after the game.