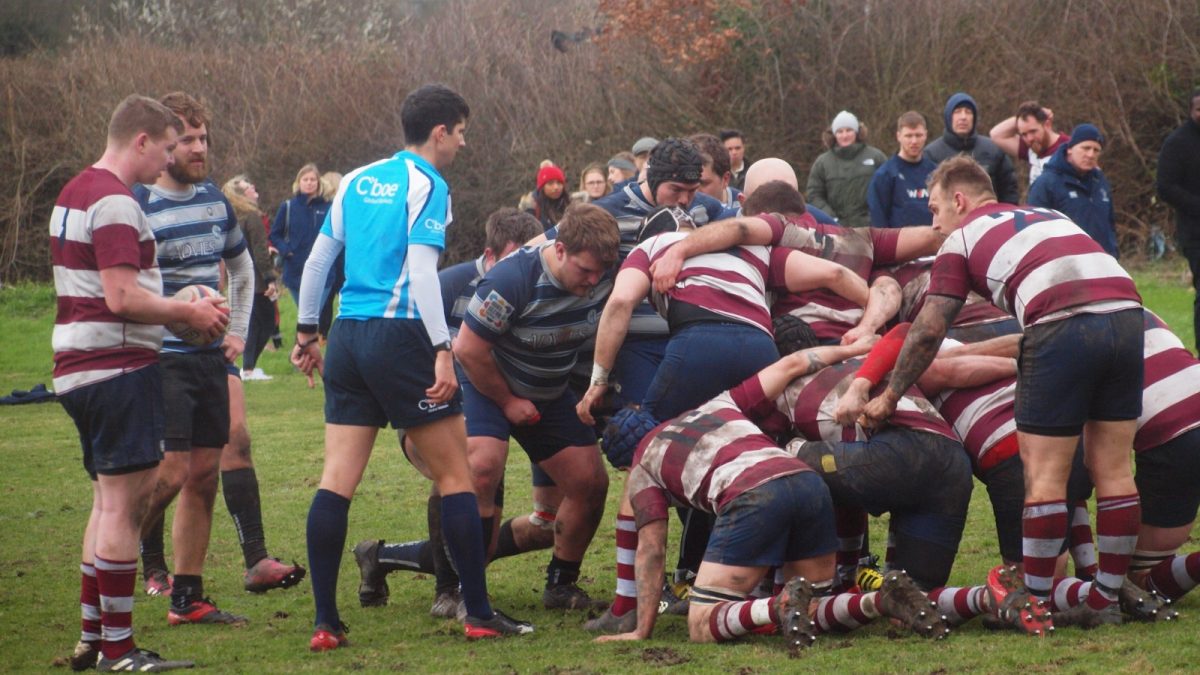 For the second consecutive Saturday Trinity found themselves facing a gale in the first half and were extremely pleased for the first half hour to hold the hosts scoreless.

Trinity had barely put a foot in their opponents’ half and had to defend like terriers to keep out a talented Kingston outfit. Time and again the home side laid siege to the line but heroic tackling, with No.8 Matt Shillabeer playing his heart out, forced back the tide. Tim Mash, playing at full back tidied up well when he had to deal with some well placed kicks. Kingston did not help their cause by a number of careless passes and knock-ons and should have been ahead much sooner than they were. On 30 minutes they did take the lead when Trinity tried to run the ball out of defence and lost control of possession. Kingston pounced on the loose ball and prop Sam Johnson forced his way over for the try. Fly-half Ollie Clements kicked a stylish conversion and Kingston were 7-0 to the good. They kept the pressure on and an excellent move almost brought another score but a loose pass denied them and Trinity took an excellent line out ball to set up a maul and clear to touch. Half time came and seven points did not seem enough of a lead for Kingston in the conditions.

Scrum half Jack Greenwood, who had a fine game for Trinity, put in some high kicks with the wind to gain territory and following two surging runs by flanker Rob Farmer the visitors scored on 47 minutes after the ball went through about six pairs of hands to winger Dave Bouchard who crashed over for an excellent score. Greenwood converted and Trinity had everything in their favour. However, it was Kingston who now dominated. They upped the pace and ran with purpose and skill and the loose passes and knock-ons of the first half were forgotten. On 59 minutes, loose-head prop Matt Bolster finished well with what proved the winning score. Clements was unlucky when his conversion attempt struck the upright.

Trinity came back well but by now the wind was not as fierce as it had been earlier and Kinsgston played cleverly to frustrate the visitors. Skipper Ali Hall and second row Jack Whitewood carried well and Andy Dean in the centre tackled fiercely as usual and was denied a couple of his signature turnovers. A fine run by centre Temi Okenla brought him to within 7 metres of the line but this was the closest Trinity got as the home side closed out the game.

Coach Andy Edwards was very pleased with the effort, especially of the 5 second team members replacing more regular players, against a very strong Kingston fifteen. Lock Iain Munro put in a huge shift, Farooq Agbalaya, fighting an injury, made some good sallies and the wingers Bouchard and Callum Plumb stepped up well to the challenge. The heroics in defence in the first half deserved a better reward, particularly as this was done in front of the baying of a number of the home supporters who went beyond what is expected in rugby. Thankfully this was not so prevalent in the second half.