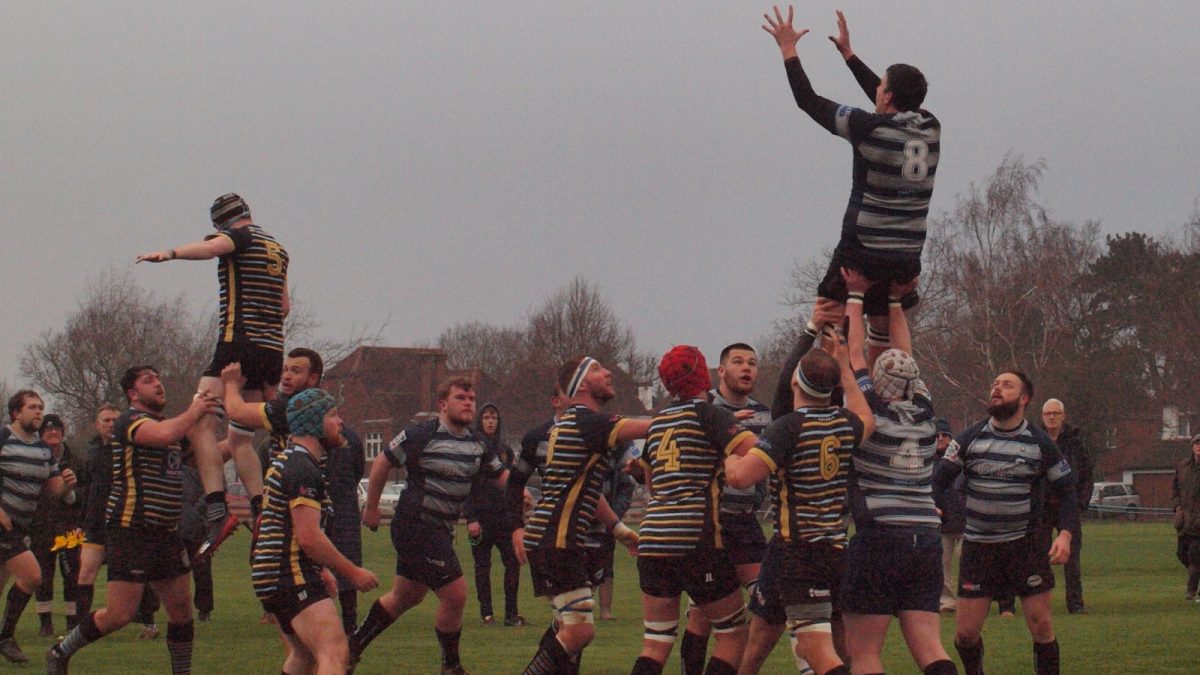 Trinity started like the proverbial train and were ahead in the first minute when a strong scrum released a swift attack and full back Marc McEvilly made good ground before unloading to centre Andy Dean who scored.

Fly half Dan Crouch converted and added a penalty goal shortly after to give his team a 10 – 0 lead. Walcountians now had a period of dominance in which they battered the home line but Trinity held firm and a penalty cleared the pressure.

Trinity went back on the attack and a series of penalties gave them chances. Crouch missed a kick that was well within his compass but sustained pressure by the forwards promised more points. These came when Trinity opted for a scrum close in and this yielded the opportunity for hooker Adam Stammers to force his way over for a try which, with Crouch’s conversion, put the hosts 17-0 to the good. Walcountians also suffered a yellow card and things were looking good for Trinity. Instead it was the visitors who now threatened more. A number of infringements by the home team saw opportunities for Walcountians in the home 22. The defence managed to repel some powerful drives and eventually Walcountians had to settle for a penalty goal from centre Ross Norton to open their account. They kept pressing for a try and the Midwives’ defence had to work overtime, sustaining a number of penalties in the process.

A series of line outs and drives yielded nothing but eventually Mids veteran flanker Mark Macaskill was yellow carded, more as a punishment for the team than the immediate cause of a questionable high tackle. Walcountians then got their reward when hooker Rob Fleming crossed for their first try and Norton’s conversion reduced the gap to 17-10. Soon after they were unlucky not to score when a clever kick through just went dead before the ball could be touched down.

The Trinity scrum had been dominant but things were evened up to some extent when they lost Stammers to injury just on half time.
The second half saw Walcountians hold sway for long periods and Trinity were almost blown away, so dominant were the visitors. First a quick tap penalty was poorly defended by Trinity and Walcountians all but scored in a breakaway. Trinity held them on the line and then poor discipline from the visitors saw them sustain a card and Trinity cleared. They came again and only great defence held them out. So tight was the screw that only committed picking and driving from Dean on two occasions took the momentum out of the attack and steadied the ship for Trinity. Walcountians kept their foot on the gas, however, when Tom McMullan scored in the corner on the hour mark and Norton’s magnificent conversion tied the scores at 17-all.

The match seemed set for a pulsating last quarter with Walcountians looking favourites. Instead it was Trinity who managed to put a stranglehold on proceedings and their forwards took complete charge. Fine carrying from centre Temi Okenla showed the way and Trinity refused to surrender possession with skipper Ali Hall, prop Nathan Bacon and the indefatigable Macaskill all carrying and making ground. A knock-on with the line beckoning allowed Walcountians to clear but in the resulting line out No.8 George Daniels who had given a magnificent performance in this department all afternoon took another clean catch and set the drive moving.

This was the pattern for the rest of the game with Trinity setting up chance after chance from a number of penalties given away by a dogged but tiring defence. The pressure told when Bacon bullocked his way for a good 12 metres in the 22 and Macaskill was on hand to take it on and score. Trinity continued to dominate and Bacon was over the line but deemed to have been held up. The last few minutes saw more penalties conceded by the visitors and Trinity opting for scrums where they were so much in charge that it seemed they must score again. They duly did when the scrum pushed to the line and scrum half Matt Hoyles was on hand to touch down and gain the bonus point.