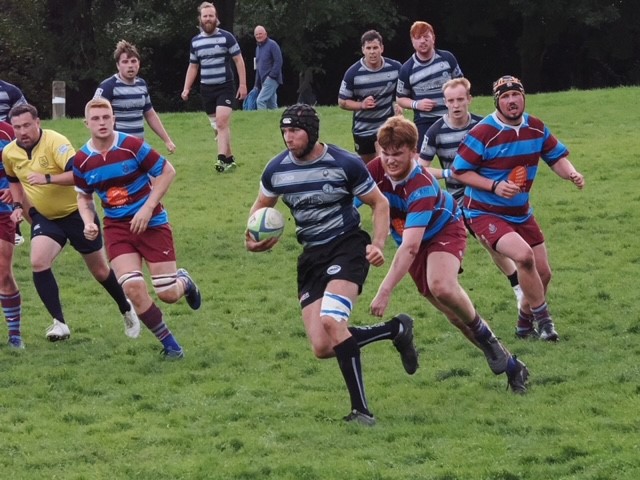 Trinity went to Sussex with two impressive wins under their belts but with many changes from the previous week.

Rugby people do not like to plead excuses about missing players and the starting XV faced up to what they knew would be really difficult. Playing with the breeze in the first half they hoped to start well but were behind after only 2 minutes. Hove had some powerful fast forwards and had a plan which they applied well to run at the defence and find holes which immediately revealed weaknesses in cover and tackling which had not existed in Trinity’s first two matches. The first try was the result of a flowing move which saw the left winger touch down in the corner. Then a powerful maul set up two more tries and another forward drive saw the No.8 stroll over to ensure the home side’s bonus point after only 17 minutes. The only sparks Trinity showed were a powerful run down the centre by veteran lock Mark Handley whose pass unfortunately went to a retreating Hove player and a fine turnover form Alex Scott which led to a tightening up of the visitors’ tackling.

This slowed down the scoring rate to some extent, but the tries kept coming with relentless marauding from the rampant hosts. James Jenkins at full back put in some valiant saving tackles but Trinity could not stem the flow. Injuries to skipper Ali Hall and lock Connor Mc Grath compounded their difficulties and they just avoided the feared 50-point deficit at the interval when the bright red figures on the digital scoreboard showed 46-0 to Hove.

Playing against the wind in the second half was a daunting proposition and a 100-point thrashing seemed on the cards. However, the visitors tightened things up and Rob Farmer, moving to scrum half used all his experience and versatility to dive his pack forward. The scrum, which had more than held its own despite the first half onslaught, continued to perform, with 58-year-old Dom Plumb deputising for Hall and doing admirably with Jacques Bryant his usual driving presence. Trinity took the game to Hove and were rewarded after 46 minutes. Good drives from Adam Stammers and Lewis Harrison brough them to the home line and a solid scrum gave the platform for No. 8 George Daniels to break the duck. Fly half Jack Greenwood kicked a difficult conversion and the nil disappeared from the scoreboard. Trinity continued to dominate and scored again after 52 minutes after good work by flanker Billy Hickson and some excellent picking and driving orchestrated by Farmer. Adam Stammers who had a storming second half got the touchdown. Greenwood made a fine attempt at the conversion from far out but 46-12 looked more respectable on the scoreboard. Mids were not finished and a fine weaving run from Farmer saw him preparing to give the scoring pass to Daniels when the latter was tackled without the ball and the referee awarded a penalty try. On the hour Hove had hardly entered the Trinity half and the visitors had registered 19 points without reply.

More injuries to Trinity eventually told, however and winger Max Mouna, who had had to retire earlier with a hamstring injury and McGrath bravely returned to keep up the rearguard action. Trinity held Hove scoreless until 10 minutes from the end when, for the first time they drove the visitors’ scrum back and added 7 points to their tally. Two minutes from the end they produced a flowing move to add another try. Trinity doggedly kept trying to get a bonus point even if this meant opening themselves up to the counterattack. Mouna, despite his injury, made a brave run and a real chance of the bonus was on the cards when Trinity won a penalty to give them a line out in the Hove 22. Unfortunately, they lost this, and Hove cleared downfield. Dom Plumb had to turn and chase back as the lone defender, and he bravely did enough to secure the ball until the support came. When Trinity tried to run again, the ball bizarrely spun loose, and the touchdown was a formality for a surprised Hove man.

Trinity had restored their pride and the final score does not do justice to the titanic performance they produced in the second half.