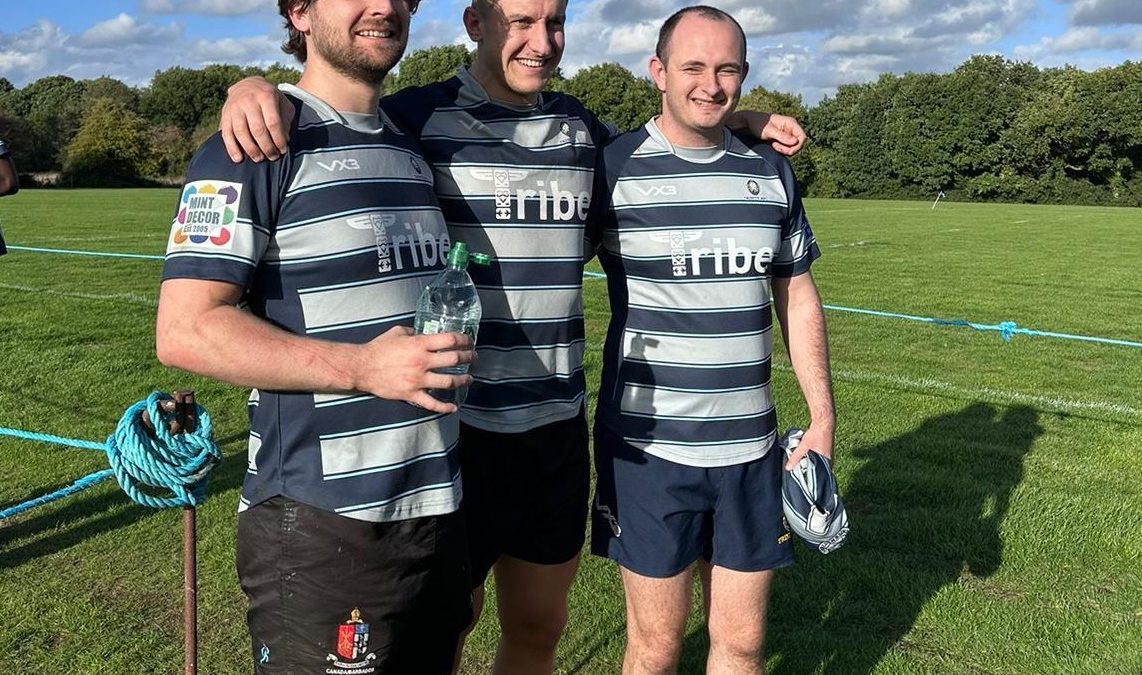 Trinity 2s started their league campaign at the weekend with a usually tough fixture against Becs Old Boys at LMA. Injuries & lack of availability meant we had barely 15 players and a team with an average of 704. Against all the odds the boys played magnificently and pulled off a 21-7 win versus a more youthful opposition who had a full bench.

Trinity started the game with 14 players with Zou stuck in traffic but took the game to Becs playing at an extraordinary tempo which surely couldn’t be maintained for 80 minutes. Good ball retention from the forwards enabled Stanners to deliver to James O at 10 – he brought Jamal and Ollie into the game who both made yardage with Jamal’s footwork delighting the home crowd. A well worked penalty move ended with Sparky breaking a couple of tackles and dotting down under the posts which was just reward for a great team effort. Becs OBs got back into the game and scored a try with Sparky in the bin for a high tackle and Trinity down to 13 – things were looking a bit ominous……

However Zou arrived and entered the game as Sparky’s sin bin was up so Trinity were up to a full compliment and took hold of the game with some more strong carries up front with the front row Juppy, Hoffy & Russ working well in the tight. Marcus & Callum got their hands on the ball and threatened on a few occasions, Jamal & Ollie also had a lot of ball which resulted in a fine individual score from Ollie where he ran in from just past half-way. Trinity 14-7 Becs OBs at half time.

A welcome breather after a helter-skelter first half and some wise words from Cappers, Trinity kicked off the second half playing down the slope. Bec OBs looked dangerous and spent much of the early stages in the Trinity 22, a fine tackle from PJ saved a certain try and Matt Glenin tackled his heart out. The Trinity set piece was solid with Hoffy hitting Laurence regularly to allow the home side to gain possession and control. Play went into the Becs 22 and Trinity put together a number of phases which allowed Sparky to ignore a 12 man overlap and crash over to score the deciding try. James converts to make it 3 from 3.

What can you say about Saturdays like this, 14 players for half the game in the face of adversity the boys grafted and tackled their hearts out, forwards & backs ran their socks off and some of the older gents played a full 80 and no doubt are feeling it today. Great efforts chaps, onwards  & upwards for this season.

DoD – a few contenders here, Sparky for a high tackle & deserved yellow, Zou for rocking up late…..but the award goes to Stanners whose boots (he bought in 1984) were falling apart, studs poking out all over the place, and he had to swap boots with ref.

MoM – again a tough one to decide in the forwards Matt Glenin gets the award for great offensive & defensive work and in the backs Ollie Case who carried very well and was rock solid in defence. Although the whole team deserves credit.