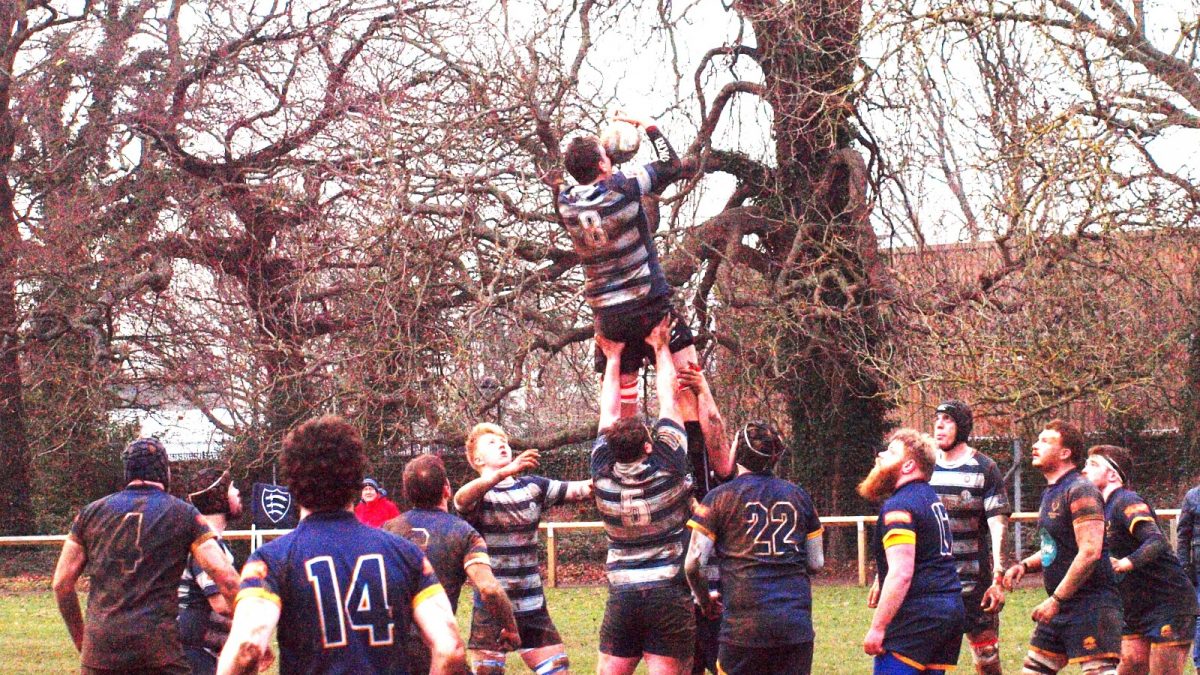 In this clash of leader and serious challengers Trinity were in complete control for the first 15 minutes.

They camped in the home 22 and it seemed inevitable that they would gain an early lead. Skipper Ali Hall was over the line but held up, the dominant front five in the Trinity scrum ensured that the pressure was maintained, but a combination of impatience on occasion by the visitors and magnificent defence from Teddington enabled the hosts to raise the siege and then come into the game themselves with two well-constructed moves.  In the tight they expertly countered Trinity’s dominance by holding them up in a maul and then spoiling a scrum.  They were also adept in getting the ball out quickly on their own put-in before they could be steamrolled off possession. 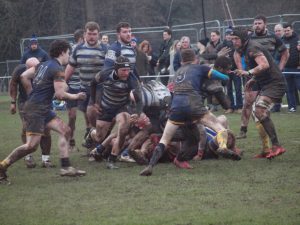 It was Teddington who had the chance to take an unlikely lead when they were awarded a penalty after 25 minutes, but Adam Price’s kick drifted wide.  There then followed a long break for injury to a home player. Teddington knocked on from the restart and the Trinity scrum forced a penalty.  Full back Ben Telfer found touch and the driving maul which ensued from the line out gave the visitors a solid platform from which Marc McEvilly made a powerful run and then Temi Okenla another break to force a penalty in the Teddington 22.  Mids opted for a scrum and powerfully drove over the home eight to give No.8 George Daniels the touchdown.  McEvilly converted for a 7-0 lead after 35 minutes.

From the kick-off Ben Vaillant was caught in possession and penalised to give Price a more straightforward chance to slot his kick.  He obliged to make it 7-3.  Teddington lost control of the kick-off and Chris Spedding surged through.  He won a penalty which Telfer kicked to the corner.  From this good position Trinity created space for Okenla to make another strong run and set up a chance for Hall to drive towards the line but the chance was denied when he was deemed to have run into one of his own men in front.  Teddington managed to clear from the scrum and then won a penalty.  When they failed to make touch Telfer put in a long return kick which McEvilly chased well to set up another offensive platform. Teddington were penalised and Mids prepared to turn the screw but a scuffle off the ball changed the referee’s mind and he blew for half time.

Trinity continued to be the stronger team from the restart and the industrious Olly Hubbard won a good turnover.  However, defences were on top for a long period with Teddington particularly strong at the breakdown and in their counter-rucking. They won several turnovers.  Hall and Okenla made a number of strong runs for Trinity, but the home defence held firm.  Coming up to the hour mark a long kick ahead by Telfer was well chased by debutant Archie McMillan who charged down the defender’s clearing kick and sprinted to touch down. McEvilly’s kick from far out hit the upright but Trinity were more comfortable at 12-3.

Teddington now had their best period and constructed a series of attacks with good handling. Only excellent tackling by Okenla and Andy Dean denied them a score.  They came again and on 68 minutes created a copybook move to spread the ball left and send winger Stuart Slinder over.  The conversion was missed but the gap was now only 4 points with ten minutes remaining.  Trinity really tightened up and were in no mood to let their opponents deny them.  Teddington had to use all their strength to defend again and did so admirably as Trinity threw everything at them in a passage of play of some 8 phases in which Hall, Okenla and Daniels all crossed the gain line but were not allowed to finish. A knock-on gave respite to Teddington, and they managed to clear to touch.  An attacking line out provided good possession and the ball was spun along the line to James Hammond at fly half who produced a lovely long pass to the flying Okenla. He unloaded to winger Ed Fyffe who finished well.  McEvilly made another good attempt to convert from far out, but Trinity were home and had done the job against very stout opposition. 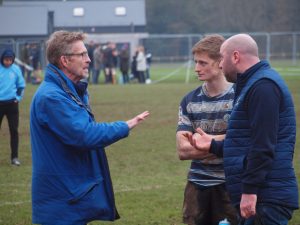 Coach Edwards said he was particularly pleased with the three young debutants, James Hammond, Archie McMillan and Krish Lall.  Vaillant showed plenty of fire.  The front row of Jacques Bryant, Tim Jupp and Ali Hall, with powerful support from Jack Whitewood and Chris Spedding behind them were outstanding.