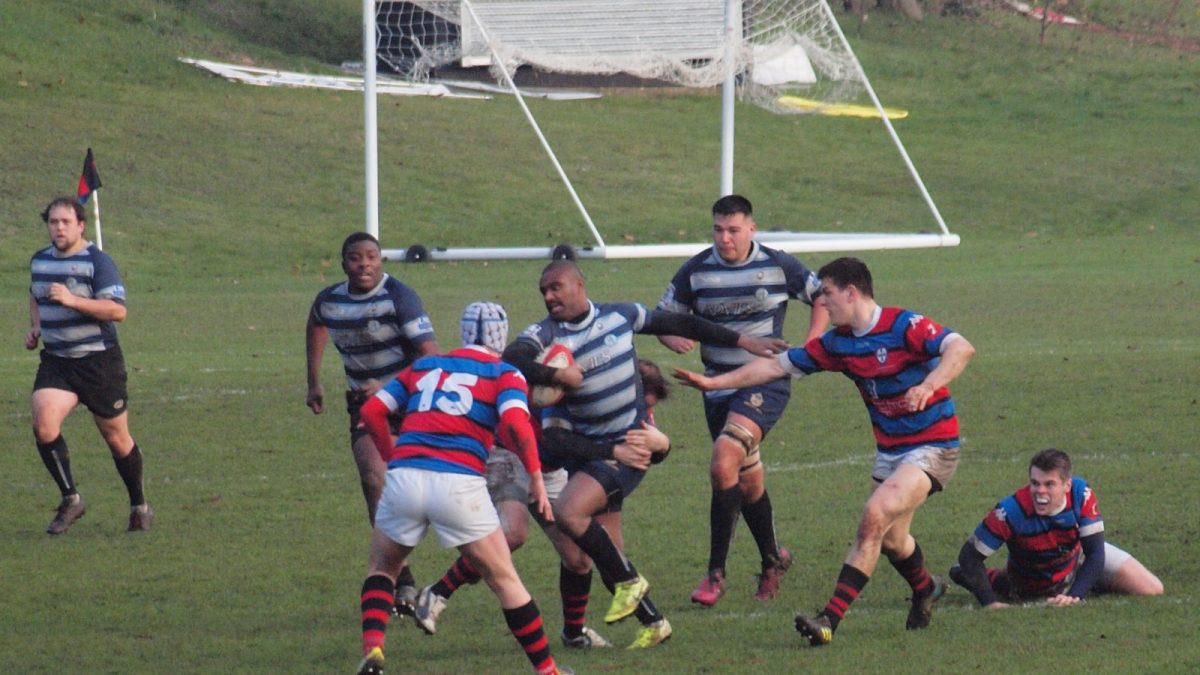 Trinity centre Temi Okenla makes a short break as various forwards seek to kill the ball before another back finds it and does something interesting.

The Trinity campaign in the Vase ended earlier last year than the near miss for a final at Twickenham. Perhaps the prospect of playing at Worcester was rather less tempting.

The match slotted into four spells of roughly equal length from a Trinity perspective.

Stage one, the opening twenty minutes, saw them adopt an unusual tactical approach of not catching any of their own passes. This is counter intuitive to the casual observer, but scrum dominance meant that knock ons usually led to a Trinity penalty. Alas, Whits had a very early successful run in the line outs, so those penalties produced no points for the visitors, and they failed to exploit an early yellow card for the Whits scrum-half for gently bouncing the ball on the head of Trinity flanker Alex Scott, also causing an easily kickable penalty to be reversed. Mental note – always be aware of when the referee’s assessor is present. This spell of the game ended when Whits had a stretch close to their opponents’ line and got a try for a 5-0 lead.

The next twenty minutes saw much improved play from Trinity, but for much of it without the territorial advantage to make scoring plentiful. Whits tidied up their own scrums by getting the ball out at Number Eight as quickly as possible, and Trinity also got the range of their own line out throws. The equalising score came from Dave Spedding, finishing a nip down the blindside and soon after Dan Crouch landed a penalty for an 8-5 lead. The key moment however came shortly before halftime when Trinity prop Jacques Bryant was yellow carded for a hand off leading with the forearm, an offence made fashionable during the recent World Cup. Trinity were in the process of wasting a two man overlap after a determined chase by James Jenkins helped recover a slightly wayward kick, which lessened what seemed to be the initial blow of the play being stopped.

Part one of half two was the most mystifying of all. The game was slowed as just about every ruck or tackle saw players from both sides flop onto the ball with no attempt to stay on their feet. Inexplicably the referee saw fit to penalise Trinity every time, whether they were in possession or defending, and this allowed Whits to add a couple of penalties and a converted try (after kicking yet another penalty to the corner). Thus Whits entered the final part of the match dragging with them an 18-8 lead – not safe, but a significant target in a game where scoring chances were at a premium.

As is often the case when a match has largely been a midfield wrestling match for the forwards, the last quarter was a bit of an anti-climax. The packs began to tire and when both back lines held on to possession they were a bit rusty with disuse. Whits were happy that Trinity were not going to run the ball back from deep so kicked the ball down the hill at every opportunity. Mark McEvilly fielded each one with a reliability not matched elsewhere on the pitch and the visitors opened a window of opportunity when Adam Stammers finished a catch and drive from a line out. At 18-13

the prospect of extra time, drawing into darkness, loomed large, but late in the game, with Trinity forced to commit to trying to force a turnover from even the least promising situations, a Whits chip kick, aided by a slightly fortuitous bounce away from the covering defender, allowed them to get the try and conversion that sealed their progress.

For Trinity next week sees them back at home and in league action, against Teddington in the unusually tight Surrey 1 division.