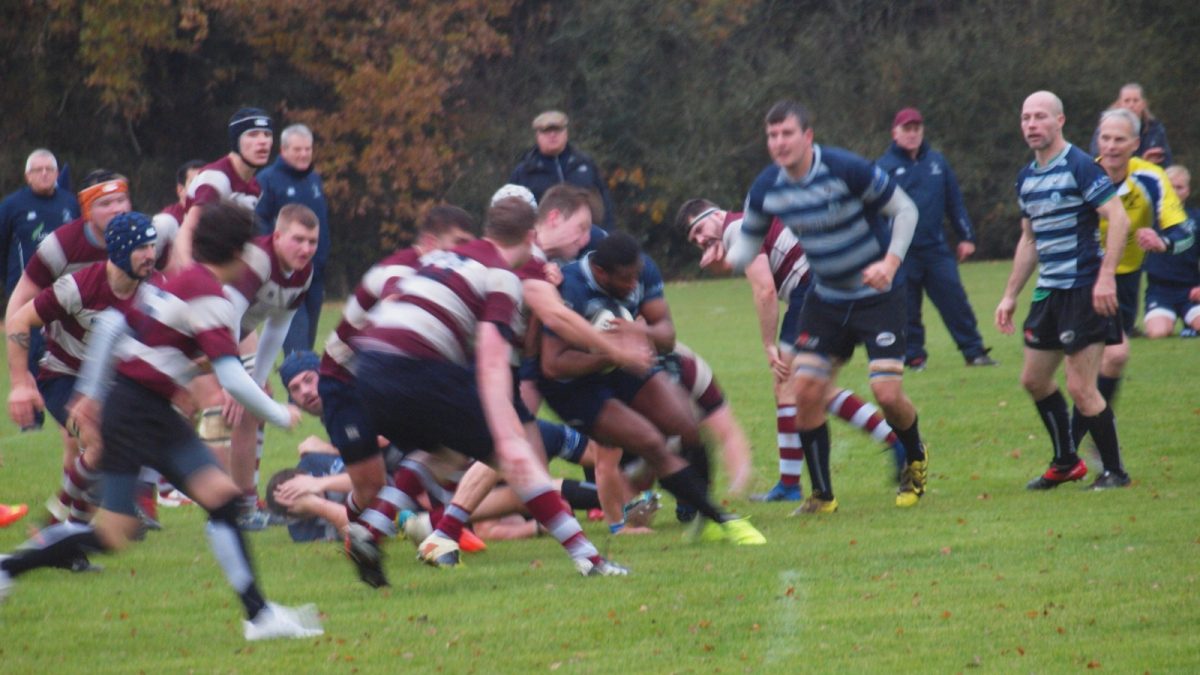 Trinity kicked off and had high hopes of a good start when the visitors knocked on. However, a huge push won the visitors a turnover and, aided by two knock-ons from Trinity, they drove deep into home territory. It seemed they must score but a last ditch tackle from full back Marc McEvilly saved the day.

For the next 15 minutes Trinity were under siege as Kingston stormed the line. The home defence held firm and, when Kingston were forced to move the ball wide, another crunching tackle by McEvilly raised the siege and Trinity were able to launch some attacks themselves. A speculative kick through gave Kingston possession and, when Trinity were then offside, the visitors had a long range penalty chance which was missed. It was now the hosts turn to storm the opposition’s line. They won a number of penalties to pin Kingston in the corner but the defence held firm. The sustained pressure eventually yielded another penalty and fly half Dan Crouch obliged with a sweet kick on 37 minutes. Kingston now attacked again but two big hits by centre Matt Shields saw them hold their narrow lead to the interval.

Trinity dealt with the restart much better than they had done in the first half and centre Temi Okenla made one of his signature runs to set up a strong field position. A clever kick by Crouch put the defence under pressure and a knock-on by Kingston allowed Trinity a free ball advantage. Crouch spotted a line of three of his backs wide on the left and his clever crossfield kick set up a golden opportunity. Trinity should have walked it in for a try but an attempt to catch the ball resulted in a knock-on and frustration.

The home side kept the pressure on and a good scrum gave Crouch the chance to dummy inside and offload to winger James Jenkins who wove his way in very tight space almost to the line. Kingston managed to keep the supporting Trinity forwards out but at the expense of a penalty which Crouch kicked to put Trinity 6-0 ahead after 47 minutes. Kingston returned to the attack and had a period of sustained pressure on the left but again the home defence was magnificent and forced them back.

On 57 minutes Okenla was yellow carded for coming in at the side of a ruck (he is adamant that he was innocent!) and Kingston skipper Ollie Clements reduced the deficit with a straightforward kick. Trinity were now up against it but the 14 men were magnificent and most of the play was in the Kingston half for the next 20 minutes. Trinity were just short with a number of sallies but won a penalty out wide. Crouch was just wide with this but Trinity kept up the pressure and he had another chance on 76 minutes which he duly slotted. Kingston tried hard to get the try they needed but the home defence held firm.

It was a tight and hard game which was dominated by excellent defence from both sides. It is hard to single out individuals but the home pack, led by skipper Ali Hall and with lock Matt Shillabeer a towering presence, felt they had done very well against a very capable Kingston eight.