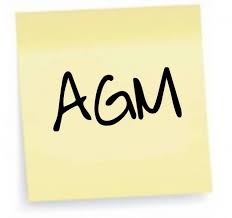 The Trinity RFC 2022 AGM was held on Thursday 19 May in the Snug Bar of the LMA Clubhouse, accompanied by the strains of Little Shop of Horrors from the Mitre Players’ rehearsal in the Main Hall.

The dozen of so assorted players, ex-players and grumpy old gits gathered, discussed and voted on a variety of issues such as the difficulty in collecting match fees in a cashless society; who is going to help us maintain a commercial support once Mungo departs for the colonies?; why doesn’t the Club year end (and future AGMs) coincide with the close season? (it is inexplicably being moved to the end of the first month of the new season!); and, more importantly, who is going to administer the Twickenham International tickets now Kerrang has stepped down as Club Secretary? 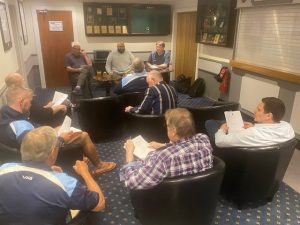 Russell Jones was re-elected Club Chairman, Nick Hamilton as Treasurer (thank goodness – what an impressive set of accounts!), Laurence Oliver as Chairman of Playing, Dan Crouch and Jon Lewington as joint Chairmen of Junior Rugby, Jeremy Glynne-Jones as Non-playing Representative and Phil Mamode as School Liaison Officer. Two posts remain vacant – Club Secretary and Commercial Officer, where Simon McInnes and Iain Munro have stepped down. Our thanks to both for their hard work in two very demanding roles.

Phil Mamode was elevated into the Pantheon of Vice Presidents.

It was agreed that a Memorial Match will be held during 2022/23 to honour and in memory of the legendary Old Mid John Starling.

Our grateful thanks to President Crouch who presided over proceedings. 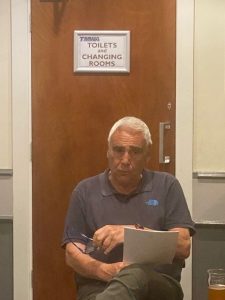 The next AGM will be held approximately halfway through the 2022/23 season sometime in the autumn after the new year end in September.